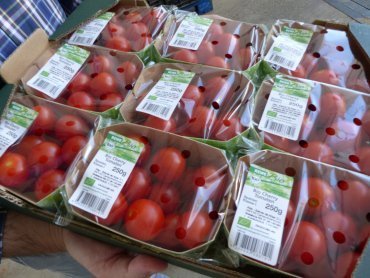 “Next year, in general, tomato surface area is certain to drop. People are waiting to see what happens in this campaign. I am not very optimistic.” David Caparrós, manager of Balcón de Níjar, is one of the many voices that see uncertainty on the horizon. Although at present there is an important, stable demand for cherry tomatoes in general, “if the prices don’t go up, cherry tomatoes simply cannot be grown in the same way that we have been doing up to now in Spain.” The main reason is the increase in the minimum wage, since labour represents virtually 60% of costs for growing cherry tomatoes. “We hope that the prices rise sufficiently to be able to compensate the increase derived from the increment in the MW. We are more competitive in this crop than other sources, but if the rise in costs is not passed on to the prices, in the medium term, they could suffer the same fate as green beans, and the crop will all move over to Morocco.” Caparrós explains that they have talked about this to their clients and they are waiting to see what happens with the prices and how the market reacts.

2018/19 has been a good year because, although the production level has given slightly more volume, there has been a lack of bio produce in Holland and Germany, both with less plum cherry production. This has resulted in the fact that the prices have been higher than in the previous year, particularly in spring and also in the summer.

For 2019/20, a reduction in the surface area used for conventional cherry tomatoes is foreseen, but in bio, there are mixed operators who are adding volumes from converted land, therefore they could be slightly more ecological cherry tomatoes than last year. The company from Nijar forecasts a slight drop of 5% in the eco cherry tomato surface area and, instead, they are going to grow Sweet Palermo peppers (for continuity with the summer production) and round aubergines and mange tout peas, to diversify the range. Cherry tomatoes (its main produce), mini watermelons and peas complete the company’s offer.