“We have created a new industrial sector” 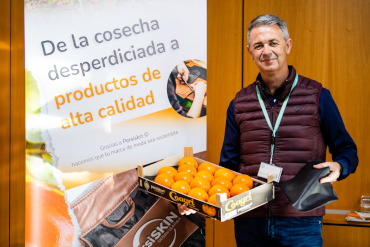 The innovative company Laserfood is presenting a new product, PersiSKIN, which reuses the persimmon surplus to create a vegan, sustainable fabric

As occurred in 2006, when the Valencian company Laserfood opted for natural branding aimed at offering an alternative to traditional fruit and vegetable labelling and therefore making the agrifood sector into a more sustainable industry, this year it has done it again, presenting a new product with a similar goal, although with a different outlook. We are talking about PersiSKIN, the first vegan textile made from persimmon skins.

Four years ago, the General Manager of Laserfood, Jaime Sanfelix, who considers himself to be a farmer and “reality sufferer,” knew how to foresee that a product such as the persimmon, with important profitability and a promising future would generate a large production surplus which had to be used and would bring in an added value.

After years of research, finally Laserfood has found the solution to the problem: the skins of the persimmons harvested in the Valencian fields will have a second life, becoming a vegan fabric, made totally of natural products and that will replace synthetic and animal leather.

The magazine Fruit Today wanted to talk to the Manager of this Valencian company and discover the origin of the Project.

How did this idea arise?

I started it, as I have farms and I know the sector from the inside. Four years ago, I saw that the persimmon market was about to explode because there were many new plantations and there was going to be an oversaturation of the offer. However, we don’t have a market where we can send surplus production. There were traditional markets such as making juice, jam, dried as snacks or any other edible alternative…

But this hadn’t worked very well in other cases…

No, it hadn’t worked at all well. It is impossible for it to work well because it is very complicated to enter a market segment where there are already large multinationals operating with some already proven costs. How many beer brands are there on the market? Hundreds or thousands. Therefore, who holds the winning card on this market? The ones who are already there.

I analysed many alternatives, many possibilities and there are some that have not come out yet. This is the first one, but I consider that it is the one that is going to be most successful. Particularly, because it is going to have a large production volume.

Could the scientific outline followed to create this vegan leather be used with pears, apples, citrus fruit or any other fruit?

Yes, it could, if a development such as the one we have carried out was made and with the time we have invested. We have a great advantage and that is that to carry out this persimmon conversion process to vegan leather, we can crush and freeze the persimmons and work with them twelve months of the year. We crush, freeze and work when we want to. During the last campaign we picked around 20,000 kilos from my own fields for this industrialisation phase in order to be operational this year.

Do you know of other companies that have embarked on similar projects?

There is not a mass offer of vegan leather on the market; just us, some Americans and little more. In Holland, they have done something similar, but not better, because they use less natural product and they also use polyurethane.

Our product is 100% circular economy and completely sustainable.

What stage is the project at now?

We are setting up the factory. We are working every day with industrial engineers to obtain the specific machinery and we are assembling it. In a few months, we will be ready to produce the material that we have frozen.

It all depends a great deal on the circumstances of the evolution of the pandemic.

How have you obtained the investment or funding?

At the moment, it has been funded using internal resources. We have invested around 500,000 euros in the product development and on the intellectual property registration. The investment forecast over the next 3 years will be 2 million euros.

This is not a business, what we have just launched is the creation of a new industrial sector. It is going to give a great deal of life and feasibility to thousands of people.

What is the ultimate goal of PersiSKIN?

The idea is to contribute value; not for me to earn money selling the leather. We are pursuing what at present is popularly being called ‘the common good’. If we can manage to make everyone win, why not try it?

Prev“5 al día” is preparing its most important annual events
Lola Gómez, Magister LolaNext
YOU COULD ALSO BE INTERESTED IN