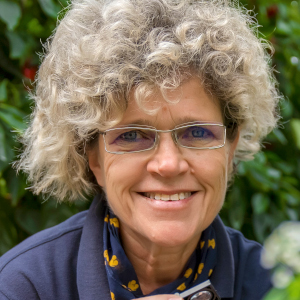 Dolores Ascensión Gómez, Sensi for her family and Lola for those who have the privilege of knowing her, was born in Balerma (Almeria) in 1966, when the sea of plastic that now feeds Europe was still just an illusion.

She says that she is just the result of the times in which had to live, in one of the poorest provinces of Spain. She left school at the age of 14 to help her parents in the fields, and that was also when she met her husband.

With these brushstrokes, nobody could expect to find the fount of knowledge, entrepreneurship and curiosity that she is. The extent of her knowledge is intriguing. She has a prodigious memory that allows her to use people’s full names when she talks about them. She talks very fast, but she never loses the thread of the conversation, even if the telephone interrupts her.

Twenty years ago, and regardless of what some people might have thought, because some called her self-centred and a geek, Lola saw the need to show Almeria’s sea of plastic to society and to turn a bad-image problem into a business opportunity. And so Clisol was born.

Part of our meeting took place on her company’s premises, where tourists, schools and heterogeneous groups meet, ready to discover life within a greenhouse. The way she tells things and her stories about the world of vegetables enthrals even the most ignorant of her listeners.

I’ve been told that you can bewitch a group of foreign tourists on the 15th of August at 4 o’clock in the afternoon, explaining how the greenhouses in Almeria are made, when there is actually nothing to see: just dust, sun and plastic.

Well, yes, it is true. It has happened to me a few times, with the tourist cruises that arrive in August. It is not the best time to see life inside a greenhouse because there is nothing there. My experience of many tours and many years helps me under these circumstances. At least, I do my best so that they can discover where the food the Europeans eat comes from.

I was also told that you learnt English to be able to explain your agro-tourism speeches. Do you have a teaching vocation?

Farming is my vocation. The vegetable world fascinates me and I just love it, and I have tried to learn everything I could by myself. I believe you should never put limits on yourself. I didn’t; I didn’t miss an evening class or talk in Almeria. I learnt vegetable physiology, agricultural chemistry, plant pathology, biological control, etc. I like to teach, but only about my subject: the fields. Regarding my English, I had to learn it because many of the visits we receive are foreigners.

Tell me the story about IFAPA. I heard that they didn’t let you do a course because you had not been to university.

Yes, there were some high-level courses for university students, and I was so interested in doing them that the dean at that time let me attend as a listener. I did all the courses and although I don’t have the qualification, I learnt a great deal, agronomically speaking. Thanks to these courses, I started giving practical courses in the fields to immigrants. And, as always, one thing led to another.

You come from a humble family and nobody could tell… by the way you speak. You could have told me that you were an agricultural engineer and I would have believed it.

Until I was 22 years old, and married, I had never read a newspaper, let alone a book. My mother did not know how to read or write because she lived through the war. In my house, the only paper was the Social Security book.

You married very young, didn’t you?

Yes, I met my husband when I was 14 and we got married when I was 22. On this aspect I am a very traditional woman; but I assure you that in everything else I am a warrior and a feminist. My new status of a married woman allowed me to do things that I couldn’t have done as a single woman, because my husband has always backed me. He was one of the few who studied Vocational Training and he was full of curiosity to learn. It was a time when we both signed up for everything.

What role has your mother, another farmer, played in your life?

A very significant role. She, along with many other women from her time, was one of the foundations and managers of the farms, but they were not visible. My mother has been my greatest support, but she always held it against me: “all this studying and you pick tomatoes. You are always doing courses and you never get to enjoy the results.” She looked after my twins while I was away, but she didn’t understand about a woman travelling alone and arriving home at 11 or 12 o’clock at night. This changed on the day that I was awarded the Gold Medal by the Andalusian Government. She cried, she was really moved and I think that since then she has understood that my effort was worthwhile.

You are pure dynamite. Can you tell me all the ‘jams’ you are involved in?

I am a consultant for PITA; I am on the Social Council of the University; Vice-president of the Chamber of Commerce, Member of ALMUR; I form part of the Andalusian Gastronomy Academy and, for the past five years, I have imparted a master at the Basque Culinary Center.

I saw a significant exhibition of recognitions and awards at the entrance. What have they all meant?

Well, public recognition is always flattering, but I don’t let it go to my head. I know exactly where my place is, what my values are and what I want from life.

These awards must make you leave the greenhouses often

Yes, but I consider that it is part of my activity because the end purpose is to spread the work we do as farmers. The only thing that I don’t like about these outings is the paraphernalia of getting ready, putting makeup on or wearing heels. I feel like another person, even when I am made-up for television. I think that the last time I pulled out all the stops with my makeup was for my sister’s wedding.

You are a bottomless pit regarding knowledge about the vegetable world. I was knocked out by the explanations that you gave us inside the greenhouse

It is not what is told, or what is shown, but how it is told and how it is shown. With passion.

What do you do in your daily routine that is not work?

I spend an hour running around eight kilometres along the Balerma beach and doing the stretches my physiotherapist tells me to do for my neck and back. And at the moment I am a little behind in my yoga classes, but I will get back to them soon.

And at the weekends?

On Sundays I like to sleep in. We take advantage to get together and have long lunches with friends and family. In the winter, I like to read, but when the spring arrives, it becomes impossible because my workload builds up.

What does Almeria’s sea of plastic need?

We have the house very clean on the inside and now it is time to regenerate the outside, to bring diversity back to the fields, the hedges around the greenhouses, around the paths. The original fauna should come back. We must look after nature and be sustainable and we must also pass this on.

Prev“We have created a new industrial sector”
Holding our breath, but still workingNext
YOU COULD ALSO BE INTERESTED IN