“We know the varieties and we advise buyers” 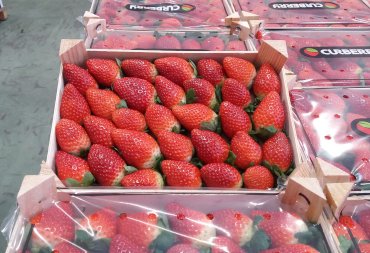 The Manager of Escandell, with several stands in Mercabarna, asserts that “in this trade, those of us who are dedicated to selling, work as advisors and assessors for the clients about the products they demand. Possibly, this is one of the success stories of Mercabarna and of the shops that are supplied by it. This formula does not work when the client goes to a supermarket and is alone in front of the shelves.”

Escandell comments that, at a meeting with two stand holders at the market, who also market strawberries, they coincided that at this moment between the three of them they had 16 different varieties of strawberries on their stands. “We know them and we can talk about their behaviour, their flavour… The difference between a wholesaler and a supermarket is that the latter are more interested in larger sizes, which are produced more and that have a longer shelf life. The flavour, which is the most important point, becomes secondary.”

For over three decades now, the Catalan company has maintained a high specialisation in Huelva strawberries. It always works with the Huelva company Jote, which has local varieties and offers Escandell one of the best products from the fields of Huelva. “This year the quality of the strawberries is good as a direct result of the lack of rainfall, which has meant there have been no problems with damp or rot.”

Amongst the buyers at Mercabarna, there are many foreign communities, which “although they look at the price, they also know how value the brands or a high-quality product, along with good flavour and they are ready to pay for it. We have shown them, advised them and made them loyal.”

The executive continues “in this highly digitalised society, we must value the work of a good fruit seller, who can choose the best product to take to his own greengrocer store. In the end, we are talking about something as important as food. It is sad that consumers take the easiest route, using Amazon or the supermarket chains and there the professionalism of the person who is in the store is not paid for correctly.”