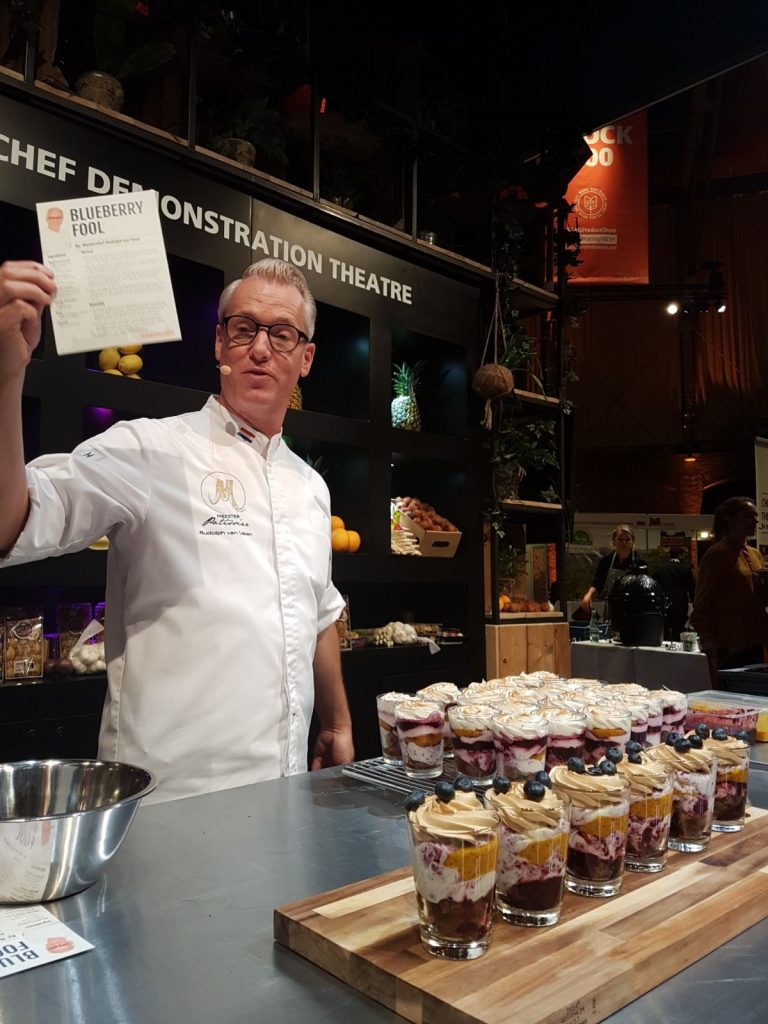 The Chilean Fresh Fruit Exporters
Association (ASOEX) together with the Chilean Blueberry Committee and ProChile
have demonstrated their ongoing commitment to the Dutch and wider European
market by sponsoring and exhibiting at the second annual Amsterdam Produce Show
and Conference (APS17).
Eager to continue building Chile’s export presence in Europe, Chile participated across key
areas of APS17 under the Fruits from Chile banner; exhibiting on the show floor and
participating in the educational seminar programme, while the Chilean Blueberry Committee
sponsored one of the live chef demonstrations.
“Chile remains dedicated to Europe, and maintaining our presence in what continues to be
our second-largest market for fresh fruit,” said Charif Christian Carvajal, ASOEX’s
Marketing Director for Europe, Asia and the Middle East, who attended the event.
“We are certain there’ll be more opportunities to grow exports of Chilean blueberries, table
grapes, and apples to Europe,” Carvajal continued. “There are new opportunities to watch
out for, especially in the organic market and in relation to the Eurasian alliance.”
While exhibiting at the APS17 on 15-17 November, ASOEX was pleased to receive
considerable interest among local importers in Chile’s organic fruit offer, notably organic
blueberries.
“The organic sector is growing in Chile,” Carvajal explained. “In the future, the market will
see a lot more organic blueberries from Chile, in particular.”
To further capitalise on those opportunities, next year the Chilean Blueberry Committee will
participate for the first time at Biofach, the world’s leading trade fair for organic food, which
takes place in Germany on 14-17 February 2018.
“We are bringing a delegation of organic blueberry growers and exporters to meet and do
business with importers and buyers attending the show,” said Andrés Armstrong,
Executive Director of the Chilean Blueberry Committee.
Highlighting Chile’s world leadership in blueberry exports, during the APS17 The Chilean
Blueberry Committee was proud to provide the blueberries used in the Chef Demonstration
Kitchen by the famous Dutch Masterchef Rudolph van Veen.
Best-known for appearing on Dutch television channel 24Kitchen, where he hosts various
cooking programmes, award-winning celebrity chef Rudolph, who is both a Masterchef and
Master Pastry Chef, exclusively created a recipe for a Blueberry Fool dessert using
blueberries from Chile.
Extremely popular with the audience, the dessert comprised an oatmeal cake base with
layers of blueberry and mango compote, whipped cream marbled with more blueberry
compote and a meringue top that was garnished with fresh blueberries.
Taking part in the APS17 seminar programme, Carvajal also gave a useful and
comprehensive insight into how Chile’s fruit industry is adapting to the ever-evolving
requirements of international markets.
Highlighting the continued efforts in varietal development, marketing and promotional
activities, and supply chain transparency, Carvajal emphasised Chile’s commitment to
remaining relevant as an export-orientated supplier.
“In the next five years many varietal changes will come from Chile, especially in table
grapes, as growers look at new varieties that are harvested later in the season, easier to
transport, larger in size and sweeter in flavour,” Carvajal said.
“Chile is also adapting it’s marketing and promotions to meet what individual markets
require. For example, the Chilean blueberry committee has formed an alliance with
Freshuelva in Spain to promote the consumption of blueberries in Spain during both the
Chilean and Spanish seasons.
“And, as for transparency, today Chile is one of the few countries in the world where you
can see online how much fruit is being exported in boxes or cartons on a day-to-day
basis.”
Chile continues to be an important supplier of counter-seasonal fruit to Europe and the
world at large. Every day 82 million consumers worldwide enjoy a piece of fresh fruit from
Chile. In 2016/17, Europe received 23% of the 2.6 million tonnes of fresh fruit grown and
supplied from Chile, according to data from ASOEX.
The Netherlands is still Chile’s first port of call in Europe, although in the last few seasons
exports have contracted on account of growers directly supplying buyers in their end
markets. Europe remains Chile’s second-largest export market, after North America and
ahead of Asia.