During the opening ceremony of the 12th edition of Interpoma, the only international trade show dedicated to the apple, scheduled from today until November 19th, the winners of this year' s Interpoma Award, dedicated to the highly topical issue of water saving in agriculture, were presented. 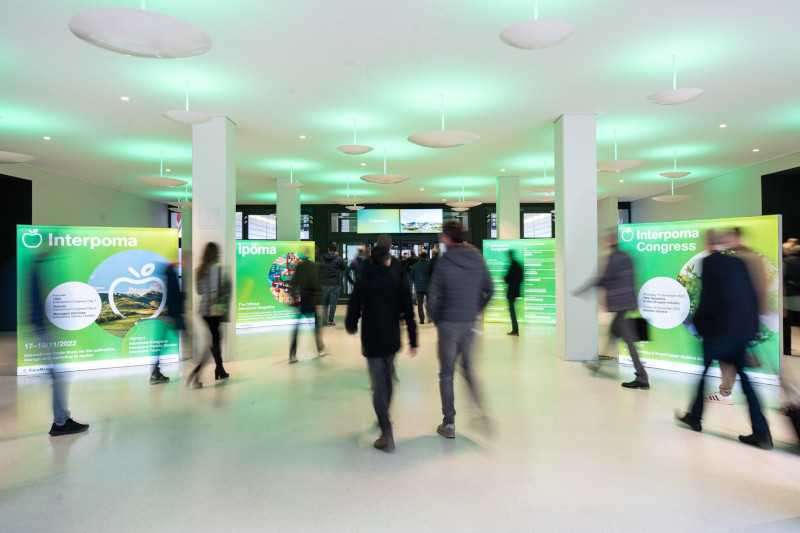 The 12th edition of Interpoma was inaugurated. After the 2018 edition, the exhibition returns to Fiera Bolzano from today until Saturday 19th November, with 490 exhibitors – 30% of whom from abroad from 17 different countries – and specialised visitors expected from all over the world. The stars of yesterday’s opening evening were the winners of the Interpoma Award 2022, the competition organised in collaboration with the Faculty of Science and Technology of the Free University of Bolzano and the Italian Society for Horticultural Science (SOI). In each edition, the Award touches on different themes affecting the apple industry and this year is dedicated to technologies that optimize water management in apple orchards, allowing water savings and improving yield or fruit quality. The award includes two categories, one reserved for Companies, the other for Start-ups. The jury of experts chaired by Massimo Tagliavini, Professor at the Faculty of Science and Technology at the Free University of Bolzano and President of SOI, has named two winners and one special mention.

The winner in this category is the Polish company Inventia sp. z o.o. with the Agreus® system. Agreus ® has been recognized as the most complete and user-friendly system allowing for a precise control of the irrigation management, based on soil water availability and climatic parameters. Its main features include solar powered sensors, wireless transmission, an App customized to suit the growers’ needs, an alarm notification of the irrigation needs, and the possibility to automatically manage the irrigation process. Additionally, the system provides tools for managing fertigation, frost control and modelling pathogens´ development.

The Special mention goes to the Plantection system has been recognized as a valuable irrigation control technology for larger agricultural enterprises or cooperative irrigation schemes, where system complexity and safety of operations are decisive criteria. The modular architecture with the possibility of integration of sensors and meters and the user-friendly operation are among the features worth to be mentioned.

The ‘Start-ups’ Award went to the ODIS smart irrigation system, that has been evaluated as highly promising for its capacity to integrate different sensors – for both environmental variables and plant conditions – into a versatile, cloud-based App which will enable farmers to monitor the water status of their orchards and will eventually allow for a control of the irrigation system.

During the evening there was also time for an update on the status of the international apple industry. Philippe Binard of WAPA – World Apple and Pear Association gave an overview of apple production in the European Union. Poland leads the way in terms of production value, accounting for 23.02% of the market share, followed by Italy with 22.51% and France with 21.48%. As far as volumes are concerned, the total estimated harvest in the EU will be 12,201,000 tonnes: Poland is confirmed as the leading producing country with 4,750,000 tonnes, an increase compared to last season, followed by Italy with 2,054,000 tonnes and France with 1,391,000 tonnes.

Alessandro Dal Piaz of Assomela spoke about Italy. “The overall production in Italy is quite in line with the last two seasons. While the quantities in South Tyrol and Trentino have decreased compared to previous years, Veneto and Piedmont have compensated with a slight increase, even though a large part of their supply is destined directly for processing,’ says Dal Piaz. “Since mid-September, part of the harvest has been able to benefit from the good season and express the best quality of the fruit, in colour and taste.”

Pierre Venteau – Director ANPP Association National Pommes Poires – spoke about France. “At the beginning of July, expectations for the harvest were very high, significant growth in terms of production was expected. Instead, due to the heat wave, there was a drastic drop, which forced us to revise our forecasts. However, the quality of the fruit remained good, with a very good sugar level for many varieties”.

Dominik Wozniak, President of WAPA, talked about Poland. “The difficulties that producers have had to face in recent months are similar to the problems that have affected other European countries, such as rising logistical, energy and fertiliser costs. The Polish production figures are very positive, but this year will be remembered by the producers as one of the most difficult in recent years: although there was no damage due to hailstorms, the problems started already in September. In fact, it was clear from the beginning of the harvest that not all the apples would be picked, due to the severe lack of available labour. Many of the seasonal workers in Poland are in fact Ukrainians who, due to the war, could not participate in the harvest. In addition to this difficulty, many growers chose to deliver the apples directly for processing in exchange for low prices, rather than having to bear the costs of storing them in fridges for the next few months”.

“In this 12th edition of Interpoma we want to celebrate the return in presence of the world’s only specialised event dedicated to the apple, and we do so through a rich programme of collateral initiatives,” states Thomas Mur, Director of Fiera Bolzano. “There will be many novelties during these three days that will accompany and integrate the traditional appointments that have made Interpoma so successful to date: Interpoma Congress, which will feature two focuses on the US market and on robotic harvesting, no less than 10 guided tours that have already sold out, and, an absolute novelty, the Interpoma Variety Garden, an exhibition of 55 managed apple varieties from the main producing countries around the world organised in collaboration with Variety Innovation Consortium South Tyrol SK and the Laimburg Research Centre”