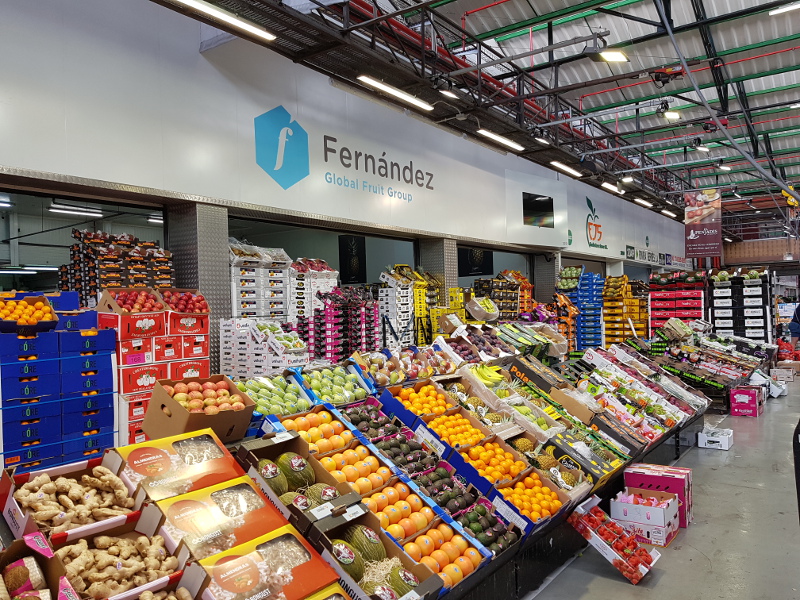 Mercabarna published record figures in 2017. Its General Manager, Josep Tejedo, explained all the details of this evolution to Fruit Today.

Which were the general marketing figure and the one for fruit and vegetable in particular? And within these, has anything stood out?

Specifically, the fruit and vegetable sector at Mercabarna (referring to the Central Market plus companies in the Complementary Activities Zone – ZAC) also marketed a record figure, 1,870,098 tonnes, 6% more than in 2016.

In particular, the Central Market of Fruit and Vegetables increased its marketing by 4% compared to 2016, reaching for the first time in its history a figure of 1,150,169 tonnes of produce marketed.

The companies from the Complementary Activities Zone (ZAC) in Mercabarna that market fruit and vegetables also registered an important sales volume of 719,929 tonnes, 10% more than in 2016.

How are the Market’s exports and imports evolving?

However, the influx of foreign buyers to Mercabarna’s central market increases every year. Fruit and vegetable produce bought here supplies the rest of the continent.

Regarding fruit and vegetable imports, they represented 29% of the total marketed. The main country we import from was France, providing 12.7% of the Market’s produce, followed, but a long way behind, by Ecuador (2.6%), South Africa (2.1%) and Holland (2%), amongst the most important ones.

With respect to the renewal of infrastructures, what point have we reached? What has been done over the past year?

In 2017 the roofs of another 2 buildings of the Central Fruit and Vegetable Market were finished, and the entire concrete structure of both halls has been repaired. Additionally, we have finished the renewal of the low voltage system and implemented the fire-fighting system in the 7 buildings making up the Market. We have virtually finished refurbishing the agricultural cooperatives area.

In 2018, we have already finished the roofs of another 2 buildings, and we have started another two. In 2019 we will take on the last roof.

At what point is the construction of the ecological hall, and how many companies have applied to use it? Do you have any figures for the evolution in ecological produce?

We intend to lay the foundation stone at the end of the last quarter of 2018 and it is planned to be finished in March, 2020.

Initially, and according to the business demand we have had, a Market with 20 wholesale stands and an area for local producers has been planned, where fresh ecological produce will be sold.

We don’t have any ecological marketing figures, but at Mercabarna, there are already over 15 important companies that are deeply committed to ecological produce, as well as 2 specialised in Bio produce.

Have sales to the HORECA channel increased during 2017?

Yes, we have seen this as the marketing by companies located in Mercabarna’s Complementary Activities Area (ZAC) increased. These companies are the ones that are specialised, amongst other activities, in adapting to the growing demand by restaurants and consumers to acquire produce with added value.

In 2017, fruit and vegetable, fish and meat companies located in the ZAC increased their marketing by 10%, 14% and 6%, respectively.

What initiatives have been carried out aimed at food professionals?

Amongst the most important initiatives that we successfully organised in Barcelona, according to the participants, was the World Union Conference of Wholesale Markets, which included the main wholesale and retail markets from all over the world. This event brought together 250 executives from markets in 26 countries who debated about ‘The Markets of the future: efficient and responsible’.

We also created the Innofood awards, conceived with the idea of generating innovation and employment in the food sector, one of the most strategic areas in Spain. Through the Innofood programme, Mercabarna and Barcelona Activa accompanied 15 young entrepreneurs from the very beginning of a business idea to the launch of their start-ups.

Additionally, in October we will award the Mercabarna Innova prizes to the companies located on our premises that have developed innovative products or services.

This year Mercabarna is also carrying out many training actions…

Yes, we have opened the new Aula del Fresco (Fresh Classroom), which will allow us to train more unemployed people in food trades with an important demand for labour.

Furthermore, at the beginning of July we organised our first Summer University Course on ‘Sustainability in the agrifood chain’, aimed at bringing up-to-date knowledge about the main challenges of the agrifood sector to professionals and young students in this specialised area.

In addition to this, we have signed a collaboration agreement with Ferran Adrià to help him carry out part of the Bullipedia project. This is an initiative that will allow fresh produce to be understood better and that will include four volumes devoted to raw commodities, which will be published at the end of the same year.

For the third year running, we have organised the Summer Campus for at-risk children, ‘Refresh yourself with 5 a day’. This year, 537 children from social action organisations in Barcelona and some districts in its metropolitan area have taken part.

Moreover, in October, we will celebrate the 4th edition of the Mercabarna Race, where citizens can enjoy a day of sports and leisure and at the same time discover this great market.