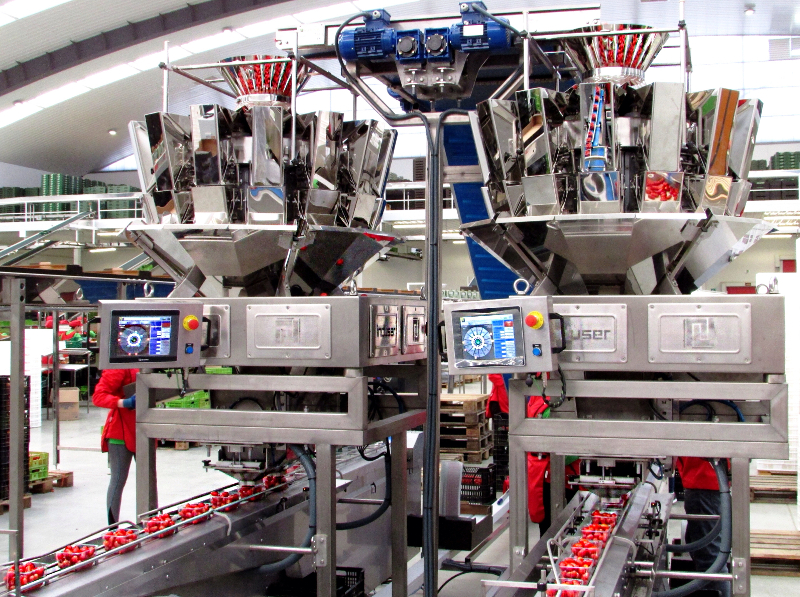 Cherry tomato production in Almeria and Granada has reached the head of the sector thanks to their unquestionable quality. Companies such as Granada La Palma, Unica Group, Eurocastell, Miguel Garcia e Hijos, Grupo SCA, Hortichuelas, BioSabor, Acrena and Nature Choice are some of the main producers, and all of them have a need in common: speeding up product management as much as possible to supply their customers’ demand in as little time as possible and using a wide range of formats, from buckets to glasses, clamshell containers and flowpack bags. On this point, all of them have placed their trust in Induser, an engineering company from Almeria specialising in the design and manufacturing of packaging lines.

Their star product is the multiformat packaging machine with associative weighing, where accuracy has priority thanks to its software that correlates the data obtained from the combined weighing process from different scales. This system can be applied to cherry tomatoes, but it can also be used for blueberries, cherries and Sweet Bite type peppers. The manager, Pedro Martínez, states that the correct option for large companies is the multiformat packaging machine with two parallel weighing machines, which allow the production reached to be speeded up, reaching 130 trays/minute. “Large amounts can be packaged in a small space, changing the format easily in less than one minute.”

Although the popular saying states that “a prophet is without honour in his own land,” Induser has managed this thanks to its extensive experience and its close contact with the reality of the sector, which allows it to know all the details of the companies’ requirements and adapt to any changes that might arise. Its national market share represents 70% and its goal is to reach 50% in exports over the next 3 years. At the moment, it has alliances in Mexico and Holland (where Aweta markets its products and works as a counterpart to its services). “We have three installations for jalapeño chillies and two for cherry tomatoes up and running in Mexico. It is a very strong market that is committed to automation.” In Morocco they are working with Multiexport to offer technical services, and they also have a branch in Huelva to look after the growing demand from the berries sector. With regard to this market, Induser is putting the final touches to a zip-pac packaging line (self-sealing bags), which is the latest trend in the USA. In the EU this is used more for dried fruit and sweets, but we are seeing a growing interest in Huelva and we will have a sample of this machinery at Fruit Attraction.”