He isn’t married because he has yet to find his other half. He has used Tinder and is not ashamed to admit it 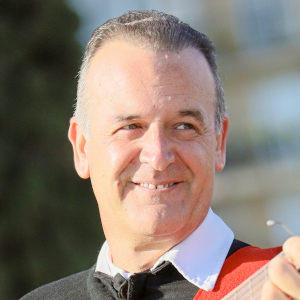 Alberto Palmí is 47 years old. He isn’t married because he has yet to find his other half. He has used Tinder and is not ashamed to admit it; he even confesses that he might use some of the photos from our session on the social media site. Being hyperactive he suffers, as I do, from bruxism and now he is in the middle of getting his night-time anti-grinding teeth guard adapted.

Alberto arrives at our appointment in the centre of Valencia on his maxi-scooter. He has had a day packed with meetings and he arrives slightly worn out. Although the appointment was planned, after such an intense day, he asked for us to meet up on another day. But, in the end, putting two hyperactive people together meant that things carried on longer than expected.

It was Thursday evening, the day when the ‘Cuarentuna’ from the Law School meets up near where we had arranged to meet. We talked so long that before we knew it, the ‘tunos’ (Spanish traditional university student musicians and singers) had all gone home.

I have been trying to think who you remind me of, and I have just realised that you look like (former Spanish banker et al.) Mario Conde when he was a legend for this country.

(Laughter). I’ve often been told that and I’ve even had to deny it a few times. There are quite a few years between us. I can’t see it myself, although other people can. I just hope I don’t spend time where he did.

What was your family life like as a child?

I had a happy childhood in a well-off family. We lived in the centre of the city in a building that belonged to my family. My father was a successful businessman and my mother was the daughter of prestigious doctors. In fact, two streets in Valencia are named after direct family members.

I’ve been told that you were a devil as a child; an antsy-pants who deceived his mother so that his father would buy him a moped and who, when his father left him in the office in the family’s factory, would escape to the shop floor with the workers.

Yes, that is right. I have had a moped since I was 14 through a stunt I played on my parents. And regarding my visits to the factory, I always ended up sawing up wood, putting screws in, etc.; I never sat still in the office. The foreman complained about me, but as I was the owner’s son, he had to put up with me. For this reason, I know the wood trade from the bottom up.

But you were educated at one of the most prestigious boarding schools in Spain, at San José de Campillos (Malaga), where journalist Matías Prats, singer Bertín Osborne and important judges all went.

Yes, I was sent to this boarding school when I was 13 years old, which at that time was a boys only school. The education there was very strict and very good. I returned to Valencia to go to university.

What a change – going from a religious, boys’ boarding school to a university environment.

Indeed, this meant an explosion of freedom for a teenager who had lived without girls around him. I arrived at the Law School and I was surrounded by pretty women and parties.

When did you decide to join ‘la tuna’?

In the first year at university. With my hormones at boiling point, I realised that belonging to the Tuna meant many chances of having a good time. And that is what happened, because that year I only passed enough subjects to ensure that they didn’t chuck me out of Law School.

Were there any special requirements to become a tuno?

The only thing required was being enrolled in Law; you could join even if you didn’t know how to play or sing. Now, the Law School ‘Cuarentuna’ is an elitist group, a circle of people who are more than friends, who you can rely on throughout your life and that have your back, both in your personal life and at work, whenever possible. Sometimes there are 8 of us and at others about 20, with different generations coinciding.

I suppose that at that time hazing was allowed.

Yes, of course. Real pranks were carried out. My class had to climb up to the top of the trees in the university street and sing cheep-cheep as if we were birds. As if that were not enough, we were only wearing underpants and we could not talk, only cheep. We made such a noise that the police came and asked us what we were doing there. We could only cheep at them. In this absurd situation and after half an hour waiting around, the police decided to leave. We had to earn our lawyer’s red sash!

And I’m sure the fun was non-stop.

Of course! Here, in this fountain in the Plaza de la Universidad Vieja in Valencia, where we are sitting now, we have bathed, we have carried out all kinds of hijinks and we have sung ad nauseum.

What did la tuna bring you during those years?

Amongst other things, it allowed me to travel to many countries because they called us to perform. At the time, the SOL hotel chain paid the flights and accommodation in Latin American countries during the summers. At the age of just over 20, I had been to Mexico, Cuba, Colombia, etc. All the badges that I have on my cape belong to the countries that I visited as a tuno and I have over 32 of them.

Did you ever think about practicing law as a lawyer?

The truth is that I never considered it because I love the business world; I have always enjoyed it and I continue to do so. Possibly, I was never cut out to be a lawyer, but having studied Law has given me important experience in the world of business.

I don´t rule it completely out, or having children, for that matter. I have had long-lasting relationships without getting married, but I have yet to meet the right person. My current situation might have something to do with the fact that I have travelled a great deal and not just as a tuno, but also in my work. I have 5 passports full of entry and exit stamps from different countries.

What is your daily routine?

I am quite a structured person and I jog for an hour along the Turia River almost every morning. Then I shower, breakfast and I read the world news. I am in the office at about nine o’clock and the first thing I do is read the sector’s press, as I consider it essential to know what is going on. And then I start to resolve issues.

If a suitor were to read this interview, what would you say to her?

(Laughter). That I am a great catch because I love cooking, I do the washing, the ironing… Whenever I have lived with someone, we always reached agreements about the household chores.

PrevThe Estrellas are back on the red carpet
Lou Lou, quality in a flowerNext
YOU COULD ALSO BE INTERESTED IN