Life is made up of phases, and the phase that Alfredo Miralles (Monforte del Cid, 1973) is living through now is devoted to his children, because he acknowledges that between the ages of 15 and 35 he did nothing but work. 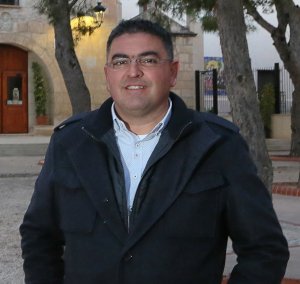 Life is made up of phases, and the phase that Alfredo Miralles (Monforte del Cid, 1973) is living through now is devoted to his children, because he acknowledges that between the ages of 15 and 35 he did nothing but work.

For this reason, his life now revolves around his children: Alfredo and Alma (twins) and Mía, but, in particular, around his son, who defying genetics, would seem to be a promising footballer.

If we were to find a word that defines Alfredo, it would have to be simplicity. He is a man not given to excess, who cares little about the brand name on his shirts, which, incidentally, his wife always buys. He has just acquired his first top-range car and is paying the mortgage on his second home.

In the morning, our interview took place in the modern sports complex of Elche C.F., where Alfredo Jr. played a match in his category against Elche Brave. A match which, it must be said, they won. In the afternoon, we went to the Santuario de San Pascual Bailón, an emblematic place in the parish of Orito, where the family stays during the summer months.

What a change! I’ve been told that you have never really been interested in football, and now you spend hours and hours watching your son from the stands.

Yes, you are entirely right. Football has never been my hobby, but being a father transforms you in such a way… There is no explanation for it, but I can guarantee you that now, I even programme my work depending on my son’s matches. I will come back from Berlin early because Alfredo has a match. Seeing how happy he is and how much he enjoys football is one of the best feelings that I have. This is authentic football, because there is no money involved.

Like any good Spaniard, you must tell me whether you support Barcelona or Madrid?

There is no doubt about it. At home and in the company, we are Real Madrid supporters.

What is your real hobby?

My main hobby has always been RC car modelling. I was mad about RC cars. My brother-in-law was the mechanic and I was the driver. We even became federated and competed on a provincial scale, but the building of the car and the race preparations took up a lot of time at the weekends. In the end, we decided to stop.

What did you study?

I finished my Primary School Certificate and immediately started working with my father. I am the only boy out of five children, and also the only one who did not go to university. At that time, we had two businesses in the family, one was a furniture rental company for events and the other was grape marketing. Both worked well, but I liked the countryside better and, in the end, the family gave the first business up.

I have never known why, perhaps because I was the only boy, but from a very young age my father allowed me to do what I liked. His sentence was always “whatever the lad says”. Obviously, I have made many mistakes and lost a great deal of money, but my father never scolded me.

Do you regret not going to college?

It’s not exactly a regret. I think that I would have been better trained, although on an agricultural level, I can guarantee you that I have spent so many hours in the fields, and I have so much experience that I am my own engineer. Languages are another question altogether. I have travelled a great deal and I know perfectly well what it means to not be able to communicate when you don’t speak the same language. On this aspect, I am very aware of the need to study, English at least. I will try to make sure that my children don’t have this problem.

So, you have travelled a great deal?

Yes. I started going to South Africa, Chile, the USA, and Italy etc as a very young man, to discover new ideas and be able to apply them to our productions. That is the point when you realise that English is essential.

Where do you get your courage from? I have always admired this type of audacity.

I suppose it comes from the fact that I am fascinated by what I do. Imagine, when I was under 20, without an appointment and with a box of grapes under my arm, I appeared at what was then Continent, today Carrefour, and they took very little time to register us as suppliers.

The truth is that we also did reckless things, such as driving without a licence. In the village, at harvest-time, I drove lorries from one place to another and I didn’t have a driver’s licence. Nowadays, this is unthinkable, but 30 years ago, no-one batted an eyelid.

You have what I call a good nose for business. Don’t you believe this is such an easy thing to find.

I suppose this is what happens when you like something a great deal, and I have never seen work as an imposition. I can truly say I enjoy working.

With so much work and travelling when you were very young, I suppose you didn’t have much time to go out on the town?

No, the truth is that I didn’t have the time. It is a phase that I missed out on, but I’ve never minded as I met my wife in the warehouse, and we have been together since I was 15 years old.

Do you have a successor?

You won’t believe this, but Alma, my 8-year-old daughter loves the warehouse. I have often woken her up at 6 in the morning and she has happily come to work with me. When we arrive home, she starts telling me all the gossip about what she has seen. She loves being involved in the business.

What was the last film you watched?

You can imagine the answer. With the kids around, I have become an expert in children’s films. In addition, my wife has left this all up to me because she never comes with us. The last one I saw was ‘Futbolísimo’, but we have seen everything you can imagine: Frozen, Beauty and the Beast, etc.

Excuse me, but I don’t want to finish without asking you why the people of Monforte del Cid are called ‘balleneros’ (whalers). Where did they find a whale when this is an inland town and the only sea we are close to is the Mediterranean?

It is strange and there are several stories about where it comes from. The most common one is that in some heavy floods, in the middle of the town, a mule’s pannier floated by and someone started shouting: a whale! A whale! And it stuck.

Prev400 Spanish companies present at Fruit Logistica
Trianum, a ‘shield’ against fungiNext
YOU COULD ALSO BE INTERESTED IN