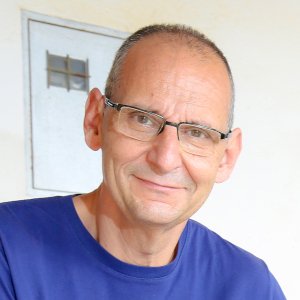 Bartolomé Saro is one of the small percentage of Spaniards who hope that the epidemic will allow them to get married. It will be his second marriage and, according to him, his last one.

He is the first zoologist that I have met whilst doing my interviews and I imagined that his house would be full of animals, but no, just the opposite.

If relevant, he never hides his political ideology because he says he is traditional, but he gets on perfectly with those who do not think like him. In fact, he tells me that some of his best friends are “from the other side.”

He is not out of step with his roots because his great grandfather stands out on the family tree. General Leopoldo Saro was an aristocrat who served in Africa, forming part of the Directory of Primo de Rivera, and he was shot at the beginning of the conflict.

He is a lively man, good with his hands, who seems to have done everything: knitted his own scarf; worked on virtually everything in house and garden DIY; carving and collecting bonsais or swimming the famous route over to the Island of Tabarca.

We arranged to meet at the Jaume Casals Bonsai School, in Elche, where he comes one or two hours a week to look after his little creatures and to learn about this surprising Japanese universe.

Bartolomé was born in Madrid 57 years ago and he has three children: two daughters, Eva, the eldest, an orthodontist; and Carla, who is studying pharmacy, from his first marriage; and his future wife Klaudia’s teenage son, Kike.

You are the first zoologist that I have met in our sector.

I studied biology and I specialised in zoology and, within this, I would have liked to do ichthyology, the branch specialising in the study of fish, but I didn’t want to go to the Universidad de las Palmas, and I finished my degree at the Complutense in Madrid.

Well, I can’t see you as another Jacques Cousteau.

It would be very difficult to surpass Cousteau, but I did my bit when I became interested in the marine world and I stopped underwater fishing. I am fascinated by the plant and animal ecosystems under the water and which, by the way, we are destroying from the land.

You aren’t going to tell me that you have swum amongst sharks and killer whales?

The answer should be yes, but I had very bad luck, not once but twice. We got ready to dive in Cape Town and when we were at sea, the waves and bad weather prevented us from doing it. It was a solitary dive in a cage to see the great white sharks of the Southern Atlantic. It is on my bucket list and I will try again. Perhaps on my honeymoon. Ha, ha, ha!

Do you have any animals at home?

I don’t like having caged or domestic animals; it doesn’t seem fair for them. I like dogs, but I would never give an animal a bad life and as I can’t look after them as I would like to, I substitute them with my bonsais, with other plants and my little garden. Pure biology. Have you noticed the beautiful dog that is wandering around us? She has dreadlocks and they are going to present it to the Guinness Book of Records as the dog with the most dreadlocks. She is called Indie Craufor and she has over one thousand followers on Instagram. She belongs to a colleague at Euro Pool and I often coincide with her boyfriend here, at the bonsai school.

How did you come to the world of bonsais?

I like plants and a decade ago I had bonsais, but as I lived in a flat they died because they survive much better outside. Now I live in a house with a garden and I have over 20. I really like reading about my hobby and the bonsai world is spectacular.

Tell something interesting that you have learnt about them.

Contrary to popular opinion, they are not originally from Japan, but rather from China, but the Japanese made them popular. Professionals and enthusiasts have a special jargon; for example, ‘neagari’ is a tree with its roots exposed. There are several basic styles with many variations to be able to obtain a harmonious composition: the shape of the trunk, the distribution of the branches and the geometric triangular shape that must be given to the tree. The choice of planter is essential, and they are usually made of pottery. If the tree is a conifer, it must be put in an unglazed pot; on the other hand, if it is a deciduous tree, it must go in a glazed pot; and, for example, if it is a meadow species, it must be put in a flat vessel. In a professional bonsai competition, everything counts: the table where the planter is displayed, the planter itself and the tree.

And the passion I am told you have for beer? Might it come from the Czech Republic?

No, not at all. For me, the best beer is Belgian. I am passionate about this drink and I make it very easy when it comes to giving presents; I am always sent beer.

Do you enjoy your present job?

Yes, I always am enthusiastic about anything I do and, although my profile is highly commercial, it puts me in contact with all kinds of people. I have been in this company for 22 years, ever since it was born in my house with a thermal paper fax machine. Euro Pool is a healthy workplace. We are a great family, which before the pandemic went away for weekends together, families included and we will do so again, making up for the ones we missed on.

I’m not sure if I am being indiscreet, but I have known you for a long time and your physical change has been spectacular.

I weighed 130 kilos and I lost 43 in five months. Not only with a diet. From the second month I started doing sport. And I haven’t given it up. I ran the Valencia marathon, many half-marathons; I cycle for long sessions; I swim and recently I have become keen on tennis. I won’t give up sport now.

In my childhood I listened to Radio Intercontinental and, as I am very traditional, at the moment I listen to Herrera on La Cope.

Ha, ha! You probably listened to me because a long time ago I worked on Radio Intercontinental….

PrevJesús Barranco. The daring cook
Minigu, a cucumber with its own nameNext
YOU COULD ALSO BE INTERESTED IN