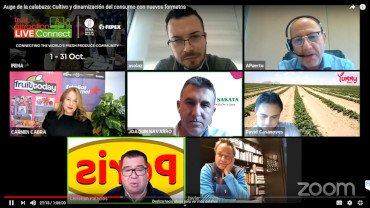 The introduction of hybrid (butternut) varieties by Sakata has meant a before and after in the development and commercial launch of the crop.

The situation was very different just two decades ago, when local, traditional squash varieties predominated, with open pollination and sizes aimed at the markets closest to the crop.

But what have been the real reasons behind this development? Globally, Sakata’s programme has had three hybrid varieties since 2008 (Ariel F1, Veenas F1 and Pluto F1) which have meant an important improvement in productivity in the fields, greater use of the flesh and an extension of the post-harvest period.

“All of this within a context in which healthy foods are taking priority in consumers’ minds, and obviously squashes are included in this category due to their important vitamin, mineral and carotene content and because they have a sweet flavour, in addition to the fact that the current format adapts better to the prevailing family models,” comments Joaquín Navarro, head of cucurbit at Sakata Seed Ibérica.

With these nutritional characteristics, plus the improvements made to the crop, the squash has become a product that is an object of desire that meets the expectations required by the market: it is interesting for farmers, for commercial operators and for food retail distribution, which is looking for a product with few discards, homogeneous and that could be on the supermarket shelves 12 months of the year.

Regarding the last point, the supply of butternut varieties has already been guaranteed over a 9-month period, from June to March, and Sakata, as the leading company in the development of this variety, is already working on completing the entire calendar.

Sakata’s portfolio includes three varieties with the same format, but in different sizes: Veenas F1 is the smallest variety. It weighs around 800 grams and it very good for export. It is followed by Ariel F1, with a uniform size; it weights between 800 and 1,200 grams. It has dark orange flesh and it has a high sugar content, with tolerance to splitting and thin neck. It is a variety that is highly suitable for export fresh. And Pluto F1 is the largest in size, between 1.5kg and 2.5 kg. It is the squash that is best suited to industry and to the Spanish market, which asks for a larger product than other Europeans.

Spain is the leading European producer and exporter of squashes, grown over 3,700 hectares with a production of around 160,000 tonnes. All of this has happened over the past 15 years.

Traditionally, squash production occurred in the Mediterranean region, but today it is very widespread as a crop with modern techniques in wide areas of Castilla-La Mancha, and it is predicted to become a complement to melon and watermelon productions. As an interesting fact, it is worth mentioning that in La Mancha, the current surface area devoted to butternut squash is around 425 hectares, while two years ago this was just 200.

In spite of this boom, the consumption figures in Spain continue to be very low compared to other countries. Without any official data, Navarro believes that intake is around 500 grams per inhabitant. “To increase this consumption, we must look at other countries such as the United Kingdom, where the product is marketed in a very wide variety of formats: chips, spaghetti, sweets, soups, etc.”

Sponsored by Sakata and Vicente Peris, the magazine Fruit Today organised the seminar ‘The boom in squash: growing and revitalisation of consumption using new formats’

The event included the presence of professional experts from all the links of the chain, ranging from genetics and production to supermarket shelves, concluding with the culinary wisdom of the chefs, the Torres Brothers.

From Brazil, Israel Leite, team manager for improvement at Sakata for the entire world, pointed out that “the butternut type has reached very high-quality parameters with sugar levels of 13º and 14º Brix, which will continue to rise with future varieties, at the same time as there is an improvement in the flavour because this is not only caused by the sugar.”

Likewise, the geneticist affirmed that “the crop yield has doubled and tripled over the past 20 years, obtaining a more uniformly-sized product, the standardisation of which makes it more interesting for retail distribution.”

With respect to the latest developments in vegetable improvement and resistances to different diseases, he remarked that “they are aspects that will never stop progressing and to which we must apply all our technical and scientific knowledge, without forgetting global warming, although squashes are grown in warm climates.”

The Marketing Manager from the company Vicente Peris, Christian Palacios, explained that “squashes still have a long way to go in consumption and this has benefitted from the fresh-cut and ready-cooked ranges. The appearance of sliced, peeled squash has been a revolution on supermarket shelves and has helped to increase consumption, as have the creams that use squash as the base.”

The company from Valencia, which has squash available 12 months of the year, also advocates keeping the more traditional varieties such as Roteña and Carruécano, as well as butternut squash. “We are strong defenders of the flavour and after four decades of experience with squash, we know what these older varieties mean in regions such as the Valencian Community, where consumption is deep-rooted.”

As a peculiarity, Vicente Peris has specialised ovens to roast the product. “Roast squash, sweets made from squash or fritters have always been present in Valencian cooking.”

David Casanoves, CEO of Yummy Fresh, a Valencian company with a producing subsidiary in Peru, which supplies Europe with squashes in counter-season, indicated that Spain could become the European hub for squashes, “not only as a significant importing country, but also due to its climatic advantage as a producing country.”

Casanoves stated that “the growth expectations could be very high when new developments appear, as is happening in the United Kingdom or Japan, where squash is eaten as spaghetti, chips, lasagnes or waffles.”

Alberto Solaz, from the sales department at Naturvega, a subsidiary of the company La Línea Verde, emphasised that the two most successful references of their creams contain squash as the main ingredient. “We work with cooperatives that supply us with fresh material, ready for cooking without any additives or colourings and we maintain the aroma and the flavour of the squash. Squash also has an important development as an ecological crop and it is becoming very significant in foods for children and babies.”

Andrés Puerto, Purchasing Manager at Cooperativa Consum, one of the retail distribution chains with the largest segmentation and variety of squashes, commented that “at Consum, over the past 10 years, a very high, constant increase has been recorded through fresh product, such as convenience food or with the creams from La Línea Verde, a format that has seen growth of up to 30% per year.”

The popular Spanish chefs, the Torres Brothers provided their more culinary view of this crop, emphasising their preference for the Butternut variety, due to its greater fleshiness. Likewise, they explained the versatility of the product, which can be used both for sweet and savoury dishes, providing some guidelines for learning how to cut the produce.