Categorical success of ‘Investment funds in the agro sector’ 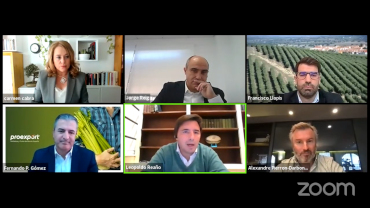 Investment funds were the subject of discussion during a webinar organised by Fruit Today euromagazine on the 17th of February. The event confirmed that this trend will continue to grow.

The meeting, which was sponsored by Proexport (Association of Producers-Exporters of Fruit and Vegetables from the Region of Murcia), included the participation of 5 highly qualified professionals: Alexandre Pierron-Darbonne, Chairman of the Label Investments fund and ex-chairman of Planasa; Jorge Reig, CEO of Agroponiente Group, a company with a majority participation by the Abac Solutions investment fund; Leopoldo Reaño, General Manager in Spain of DeA Capital Alternative Funds SGR and of the Taste of Italy fund; Francisco Llopis, Primary Sector Investment Manager of the Atitlán investment fund; and Fernando P. Gómez, General Manager of Proexport.

The programme, which lasted an hour and a half, generated significant interest and maintained a constant participation of 140-150 people connected. During the debate, they analysed the most relevant aspects of the gradual entry of capital that has been occurring in agrifood companies since 2008. Likewise, they threshed out the future consequences of these investments, which mean greater concentration.

According to the employers’ association Ascri (Spanish Association of Capital, Growth and Investment), there are around 5,000 million euros available for investing, and a very significant part of this money is aimed at the agrifood sector, which has been revealed during the current pandemic as one of the sectors that is most resistant to the economic ups and downs. The Spanish production is still very spread out and the profit margin for venture capital to underpin its size with mergers could be extraordinary.

Investment funds act in any sector of the economy, but they had not yet reached the primary sector in earnest, and every time a new operation arose, it became a headline. The first time we heard talk of them was in the summer of 2016, when Miura Private Equity purchased 25% of the citrus growing company, Martinavarro. Since then, some of the most important operations in the agricultural sector were led by the participants in this meeting.

The General Manager in Spain of DeA Capital Alternative Funds SGR, Leopoldo Reaño, commented that “the funds help the companies to take on projects that previously they could not, but not at any price, because we care about sustainability and the environment.” And accordingly, he talked about the invested companies’ obligation of reporting on the initiatives.

Francisco Llopis, representing Atitlan, made it very clear that, for his group, investment in the primary sector was not a passing phase, “as we have been here since 2007; we have been here during the pandemic and we will continue to be here afterwards. Our main focus of interest lies in olive groves, almond orchards and citrus fruits.”

For Alexandre Pierron-Darbonne, one of the professionals who has always been involved in the agricultural world, “the best candidate companies for a fund are the ones that are in an invoicing range of between 15 and 60 million euros, since the smaller ones are usually excessively individualistic.”

Jorge Reig, CEO of Agroponiente, one of the companies invested in by the fund Abac Solutions, in response to the future repercussions that this new scenario could imply for the retail sector, commented that “the idea that something is going to happen doesn’t make much sense because what the distribution requires are organisations that are more professional, which provide a good service, quality and continuity.”

With regard to the reluctance and fear shown by farmers and small entrepreneurs about the entry of funds in the sector, Reaño recommended reading the standards of the economic and social impact of private capital on Ascri’s website (Spanish Association for Capital, Growth and Investment). “They might stop being afraid,” he commented.

The Manager of Proexport underscored that “the spotlight must be put on profitability, but starting with the farmers, with the ultimate goal of achieving a greater professionalisation and concentration and being able to compete in a global world. The world moves on, and if previously the rural building societies supported agriculture, now it is the turn of the funds.”