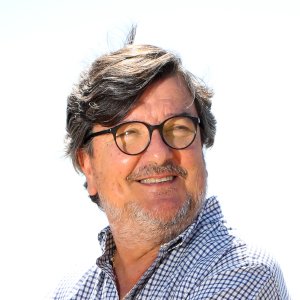 A chip off the old block.

Cecilio Peregrín (Águilas, 1961) is the fifth of nine children and he is named after his father. In the town of Águilas, in Murcia, the Peregrín clan is well-known and respected. This feeling of family lineage was instilled in him at home and he, likewise, has proudly passed it on to his three children.

On a scale of 0 to 10, his communication skills deserve top marks, unless you are a victim of his slight deafness when he is not wearing his hearing aids. Extroverted and a great joker, he even laughs at himself. This does not mean he is not a man of strong beliefs and values, who studied Law, although he has never worn a lawyer’s gown.

We had arranged to meet to go for a motorbike ride, but things got complicated that day and we had to opt for more improvised photographic settings. Passing around several beaches in the area and the fishing harbour of Águilas, we reached the house that had belonged to his parents and we ended up in the ‘La Pava la Balsa’ Square, the town’s symbol. By chance, we found the door to the church where he got married open. We went in.

Your father, Cecilio Peregrín, was a man who was highly respected in Águilas. What was your family like?

My father was a vet, although after a few years he left the profession to devote himself to his vocation: business. At that time, this involved esparto and capers. In Madrid, he met my mother who worked as a surgeon’s instrument nurse. She followed her heart and left the Salamanca district, where she had been brought up and she came to Pulpí. They remained in love until the end of their days. They had nine children and I was the fifth. My father was very strict with our education, but he was a fair, generous person. My mother, although full of tenderness, was a true commanding officer. Both of them inspired great beliefs and values in us, such as loyalty, humility and effort.

What do you remember of your childhood?

Living in a family with lots of children is always fun, in spite of my parents’ strict rules. I particularly remember when we moved to live in Granada. My eleventh birthday coincided with the day I started school.

Why did you move?

My mother, very intelligently, knew that Águilas did not have the same chances for her children regarding studies and development. Her children were growing up and one of my brothers had to start at Medical School. So the entire family moved.

So, do you feel that you come from Granada?

Wherever I lay my hat, that’s my home, as the song by Paul Young goes, although it wasn’t really his, rather Marvin Gaye wrote it. I have lived in Madrid, England, Murcia, Águilas and Pulpí. I like Águilas because it takes me back to the heart of my family. It is the place where the nine of us meet up because we have an excellent relationship and our in-laws are also added to this number. And the best of all is that we have managed to instil these values of friendship into the next generation.

At the moment where do you live, in Pulpí?

No. Now I switch between Águilas and Murcia, depending on the day of the week.

You also lived in England. What did you do there?

I did everything I could to earn a living and to learn English. I was 21 years old. At that age you can do anything.

Have you also spent much time in Madrid?

Yes, I did part of my degree there. More recently, as my wife worked there, we had several houses open and we moved back and forth. Not anymore.

Excuse me; did you bring two shirts for variety in the photographs, as I asked you?

No, I brought three. And hair gel. I was also going to bring two pairs of trousers, but I thought it might be difficult to change into them.

Why should I? They are marvellous. They have changed my life completely. Before, my children muttered and I didn’t hear them. The television at home was always on at top volume and I got left behind at meetings. I even began to think that I was becoming autistic.

As you haven’t invited me to go for a ride on your motorbike, I am dying to know what kind of bike you have and how much time you devote to it.

Last year I bought a Suzuki V-strom. There have always been motorbikes at home. My older brothers handed down their old ones when they passed their driving tests. I had an Aprilia Futura 15 years ago, then I bought a Honda, etc. I stopped going out for a while when my wife was working in Madrid. Now I enjoy it by travelling kilometres and going through unknown landscapes. We do eight-hour journeys. A day out could start from Serón-Calar Alto (the largest Observatory in Europe, at an altitude of over 2,000 metres), reach Laujar de Andarax, go through the La Ragua Pass and come back. Or reach the Santa María Pass, going up through the Alpujarras and taking two days instead of 6 hours.

I inherited my father’s passion for being informed. For me it is a way to enjoy freedom. Today everything is becoming too extreme: black or white; Madrid or Barcelona. I am not a Taliban about my ideas. I listen to other people’s opinions. I can go from Federico Jiménez to Pepa Bueno or Àngels Barceló on the radio. You can’t fall into endogamy. As I travel for many kilometres, I listen to just enough before I immediately move over to listening to music.

And your musical preferences?

I like everything but rappers. My favourite music depends on my mood. I can listen to Camarón or Vivaldi, almost at the same sitting. On my playlist I have AC/DC, Italian singers from my youth such as Sandro Giacobbe and Baglione. I have all of Supertramp’s records and I still have Genesis on vinyl.