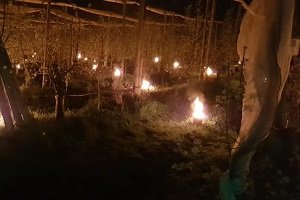 This will be a campaign to remember in the sector’s history, since all of Europe will experience a summer with an extreme scarcity of stone fruit

On different dates, virtually all European regions have been affected by the waves of cold weather. Some areas have even experienced repeated episodes. Pip fruit, with advanced flowering, has also suffered, but not with the same intensity.

At the time of writing this article (week 17), the official European figures are yet to be disclosed, but the damages caused by the frosts are well known.

Both Italy and Spain, the two countries that lead European stone fruit production, are experiencing a reduction in their harvests that has not been seen in decades. However, France has possibly taken the brunt, because even when using sprinkler systems and all the anti-frost systems on the fateful night of the 10th April, the impact of the frozen temperatures could not be reduced. The fruit trees in the Rhone Valley, in the Garonne region, in Languedoc-Roussillon and Provence could not stand up against the cold. The damages all over the country were so significant that the French government declared a state of agricultural calamity, creating an emergency fund of 1,000 million euros for the affected farmers. Although it is true that France does not have a great producer potential, this year it will be difficult to even obtain sufficient volumes for their own home market.

The weather conditions affected the whole of Italy, from north to south. The sudden drop in temperatures that occurred between the 8th and 9th of April did not only affect stone fruit, but also kiwis and vegetables.

In Basilicata, the temperatures dropped to -2 degrees; in Apulia, to -5, also affecting almonds, vines and asparagus. In Campania, the temperatures were recorded at -4.5 degrees and in Calabria, in addition to heavy snowfall, there were very strong gusts of winds in Cosenza and Crotone.

In Spain, the fruit campaign started off with losses, which the different agricultural trade unions estimated at 70%. The fruit worst affected were apricots, with Murcia showing a reduction of over 60% in its harvest, not only due to weather conditions, but also to agronomic questions.

Aragon and Catalonia, affected later on, suffered damage to over 50% of the harvest in the regions of Bajo Cinca, Baix Ebre and Segriá. In addition, once again apricots came off worst, with losses of over 70%.

In Aragon, the magnitude of the catastrophe will make production fall by around 200 million kilos and up to 3,000 direct jobs could be lost. The intense cold, between 3 and 6 degrees on Saturday and Sunday in week 15, caused irreversible damage on many farms in Fraga, Bellver, Zaidín and Osso, where harvesting will be unnecessary and the production has been entirely written off.

The campaign in Murcia started off with a 9-day delay compared to the normal programme as, between weeks 16 and 17, the sun did not shine anywhere in the entire Region, “an element that is essential for the fruit during its last days on the trees,” according to Joaquín Gómez, Manager of Apoexpa.

The earliest growing areas in the Region, inland regions with very few exceptions, have not suffered any intense days of cold or frost and their producers remain moderately optimistic regarding prices.

Extremadura also recorded cold snaps during the weekend of the 19th of March, which affected the plum crop.

This season could be the final straw for a sector that has been on a tight rope for several years now. A new campaign with mediocre or bad results will make many fruit growers abandon the sector and if possible, will worsen the crisis even more.

A harvest as short as this one will not, in all likelihood, bring any profits to the farmers. And it never rains, but it pours, because 2020 was also a sparse campaign that was not compensated by the prices. The pressure by large retailers was translated into prices that were lower than expected and the overall income was not enough.