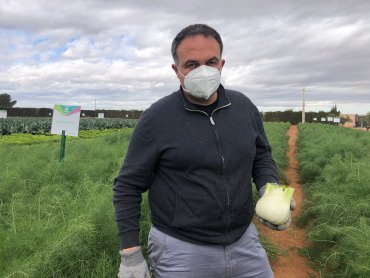 HM.CLAUSE is presenting new developments in its open air produce range that go from broccoli to celery, passing through endives and fennel.

The seed company has important new developments in its open air portfolio. Alongside the broccoli range, in which they are still growing with Trajano F1, they have a new material that complements it: HIB7192, for October transplanting, with significant uniformity and yield. Also in brassicas, they are presenting Roskof, a longer cycle Romanesco lettuce (130 days), with an eye-catching bright green colour, homogeneous and a good shape.

Parallel to this, it is extending its offer in endives. Two materials that will be marketed next year will be added to Aranza and Lesly: HMC 10725 (smooth) and HMC 11511 (curly), both with rusticity, yield and endurance in the fields. The former complements Zelinda with a broad transplanting period (November to December), high white rate, and good behaviour to sudden temperature changes and tolerance to sprouting.

HMC 11511 is focused on harvests in mid winter and Eusebio Mora, the sales delegate for Campo de Cartagena at HM.CLAUSE, emphasises the variety’s “natural white.”

They also have a significant offer in fennel, dominating Italy, the market par excellence. In Spain “some coastal supermarkets are beginning to sell it,” although the production is mainly exported to France and Central-Northern Europe. In this segment they are launching Miquelangelo (90-100 day cycle), with a very white, round bulb, very easy to cut, small scarring and straight fingers (ideal for packaging). Its good yield and adaptation to eco crops are added advantages.

One of the developments that they have in process is worth mentioning: mini fennel.

In the celery segment, the latest reference is Centauri. Very early, it has a shorter cycle than other materials in its segment. Its smooth, pleasant flavour is perfect for eating fresh, adapting to current trends (dipping, snacks). Morphologically, it has a good height at the first knot and Mora also indicates its good tolerance to bolting.

In the next campaign, they will launch CLX 357, another green celery that stands out due to the uniformity of its sticks.