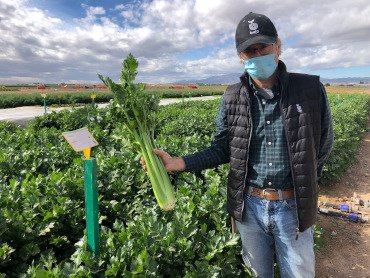 The company is extending its offer in typologies, densities and sizes.

The seed company Bejo has been working on its Murcia Open Days. There, its developments in cabbages could be seen, with proposals for different densities and sizes in all the typologies. An enormous range in which materials such as their legendary Orion (incredibly productive) and Murdoc are included, in addition to the new introduction, Antonio, with which it has taken over 70% of the pointed cabbage segment in Spain, according to Enrique Cadiñanos, Sales and Development Manager. In white cabbage, Gazebo (early cycle) stands out, which can be planted in warm regions in the winter due to its good conditions for flowering and its tolerance to sprouting.

Other varieties in this line are Benelli, which improves this good response against sprouting, bringing an extra point of homogeneity; and Tiara, smaller in size (1.2 kg approximately) and with an incredibly sweet flavour, ideal for selling fresh, like Katarina.

In order to respond to the Cool wrap trend, they have Feld Glory and Gunma, which are planted in Poland and Spain, to cover the Polish winter cycle.

In kale, Mariposa stands out, with great robustness and density in spite of the fact that it is grown in winter; and in red cabbage Alfaro stands out, a new, brightly-coloured, top-quality variety.

In the broccoli line, Redi could not be missing: a short-cycle purple sprouting broccoli with a single harvest that can be produced all year long on the Iberian Mainland, which won the jury over with its flavour at the Innovation Hub 2020 event at Fruit Attraction 2020 in the Fresh Product modality.

The celery offer is extended with Bolero, on the market from next year, which brings weight and production with a good colour and a wider stalk, in line with the national demand. Other commercial varieties are Conga and Tango (highly popular in Catalonia and Valencia) and Salsa, which is lighter in colour.

The company has materials for all the fennel cycles: Orbit, “the most popular in Murcia, very early and round”; Vulcan (slightly later); and the new Virgo, later than Vulcan, with very good filling and behaviour against oxidation problems.