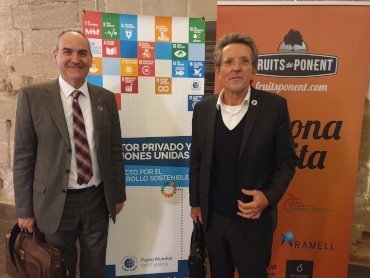 On the 13th of May, the Spanish Network of the Global Compact and Fruits de Ponent called a seminar on “The agrifood sector and SDGs.”

The meeting’s aims were based on regionally disseminating the 2030 Agenda, establish the best practices for the agrifood sector in terms of SDG (Sustainable Development Goals) and to discover the challenges and opportunities represented by these Goals.

On the 25th of September 2015, leaders from 193 countries at a historic United Nations summit adopted 17 Sustainable Development Goals for the 2030 Agenda. Ever since then, the private sector has been intensifying its efforts to meet the Global Goals for people, the planet and prosperity.

At the meeting, Angel Pes, chairman of the Spanish Network of the Global Compact, explained that “there is no better plan than the SDGs to obtain a fairer and more sustainable world for everyone, and inclusive growth will not be achieved without the companies.”

And, along the same lines, the person in charge of the Spanish Network stated that “working in alliances is the only way to ensure the scalability demanded by the SDGs. It just takes a glance at the 17 Goals to understand that no government, company or organisation can be efficient if it works on its own. Cross-cutting alliances are needed between governments, the private sector and civil society.”

The United Nations Global Compact is articulated in ten universal principles on human rights, labour regulations, the environment and against corruption.

Specifically, in the agrifood sector, the most important goals are based on reducing waste, reducing packaging, the implantation of the circular economy, responsible consumption, improvement in water management and the promotion of sustainable lines, as well as an increase in production capacity using digital farming.

The Catalan cooperative Fruits de Ponent, one of the few companies in our country’s fruit and vegetable growing sector involved in this pact, has already started up some of the Goals marked on the 2030 Agenda. Specifically, its approach is very focused on the environmental aspect.

This year, Fruits de Ponent will invest 1.5 million euros to change its energy model to a more sustainable one, following the United Nations criteria.

The work has already started on a 1.6-megawatt photovoltaic installation. The idea is for the new solar panel model to start operating at the end of this year.

The savings obtained by this photovoltaic plant are estimated at around 170,000 euros per year. “The goal is for the fruit processing station to be self-sufficient in terms of energy, and that this energy is sustainable and renewable as is marked out by the current guidelines centred on reducing environmental pollution levels,” explained its general manager, Josep Presseguer.

Following the Sustainable Development Goals of the 2030 Agenda, the Catalan company has also implemented work and life balance steps amongst its workers, as well as gender policies to prevent any inequality between men and women.

Of the many companies that make up the Spanish fruit and vegetable growing sector only ten are registered on the Spanish Network of the Global Compact: Grupo Caparrós, Primaflor, CASI, Vicasol, Agrosorigue, Armando Alvárez, Exquisite Fruits, Coato, San LucarFruits and Fruits de Ponent.

PrevStability in productions from Murcia
Mexico, the leading light of the Red Fruit CongressNext
YOU COULD ALSO BE INTERESTED IN