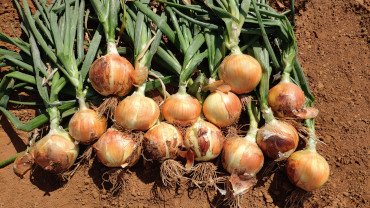 Onions are one of Bejo Ibérica’s most important products, covering between 20-25% of the national market share in this segment. The key to its success lies in the fact that when developing its varieties, “it relies on Spanish genetics”, aimed at obtaining varieties adapted to different growing regions.

Three materials stand out from amongst the 40-50 onion varieties it has in its catalogue in Spain alone. The first one is Almagro, a large onion for intermediate days that is harvested in the first 10 days of July in the Guadalquivir Valley and from the second half of July up to the beginning of August in Castilla-La Mancha (depending on whether they are transplanted crops in order to obtain larger-sized, heavier onions, or crops grown directly from seed).

Stingray is another of its star varieties, an early long day onion. The storage life of this variety stands out (up to February in natural conditions, without using cold storage), as well as the significant skin quality and color. In this case, it is harvested from the first half of August until the end of the month, depending on the region (Andalusia or La Mancha.)

The company’s latest development, Pantano, has been very well received by the most important onion producers in Spain in its second commercial year. “It has good yield, weight, many layers and excellent conservation conditions,” according to Pedro María Jurado, an Onion Technician at Bejo. Pantano is for long day, for harvesting from the end of August until September and it has the rustic appearance of the ‘Recas’ or late Valencian type.

Legend is one of the best known, well-seasoned varieties, the best in conservation, with 25 years of history behind it. And for both industry and for the general market (double aptitude), Citation is worth mentioning, “the most rustic onion on the market. Another classic (15 years on the market), which adapts to virtually all the different weather conditions in Mainland Spain.”

Looking to the future, they are developing some new babosa earliness onions (short day). And others with pink skin for the European markets such as the United Kingdom and African markets that are increasingly demanding this product.

In addition to seeds, Bejo also produces and markets onion micro-bulbs, aimed at customers who particularly need to produce bunches of onions or spring onions at problematic times of the year from summer to autumn. “They have the necessary nutrients and water for the onion to develop; they need less water in their starting phase and primary development, and they stand up to residual herbicides better. They allow a plant with a strong root system to be obtained in a month.” Since November, they have had the ecological version of micro-bulbs, which their subsidiary Broer is developing in Holland.