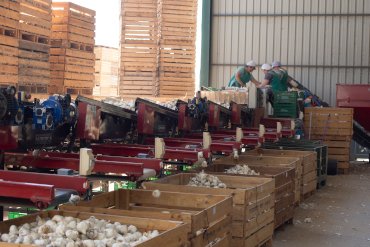 Markets such as Africa have shown interest in Spanish garlic owing to the crisis in recent months.

Last year Spanish garlic exports reached record figures compared to previous year, and this year the coronavirus and the consequences of the health crisis to the Chinese market have caused an increase of up to 40% in demand for Spanish garlic, along with ‘atypical’ situations. “In our case, we have noted the appearance of new clients and destinations that under normal market circumstances would never have asked for information about Spanish garlic. For example, African countries that mainly import Chinese garlic have been requesting prices,” states Diego Mª Martínez, assistant manager at Peregrín One Garlic.

As occurred in Peru and Argentina, at the start of the campaign the prices in the field were higher than last year’s (even doubling the price), but they have been dropping, mainly due to the return of the Chinese offer to the markets, which has now appeared at lower prices. “This is normal at the start of the campaign. They have to sell off their surplus from the previous year. China is very clear about its points of sale: its own market, south-east Asia, African countries and some countries in South America. In the United States, due to the trade war, garlic is still entering the country, but ours is standing up for itself very well. Many destinations prefer it due to its quality and the requisite plant protection steps. We must continue working for it to become even more well-known, if possible.”

Peregrín One Garlic has managed to take root on the American market with several clients on the East and West coasts. “It is a market with great potential.”

According to their first forecasts, in this campaign the company from Almeria foresees increasing its sales turnover by 30%. What is not as clear is the evolution of its invoicing, which will depend on the ups and downs of the markets.