HM.CLAUSE, ahead of the trend 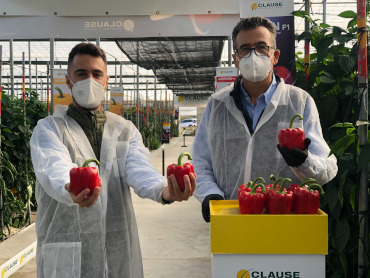 The seed company continues expanding its ION line with resistance to nematodes and powdery mildew, the elements most sought after by producers

Resistance to powdery mildew has become a priority requirement for farmers. A need that has already been taken care of by HM.CLAUSE with its ION range, which is also resistant to nematodes.

Around this time last year, we brought forward the launch of Anión F1, a red California developed for late plantations that stands out for being the company’s sturdiest variety, and in this campaign the seed company has extended the family with Fisión F1, also red, but focused on the early-medium segment, with an added value: one of the highest resistances to powdery mildew on the market, as Javier Achón, Head of Pepper Development, explained to Fruit Today.

Fisión F1 is recommended for dates from the 5th to the 25th of July and it is characterised by its high productivity and quality, in line with the company’s emblematic Abraham, a leader in sales in its segment due to the very high quality of the fruit, uniformity, attractive bright red colour and size. Both coincide in dates, along with Amavisca and they are differentiated by resistances and calibre (G in Fisión F1 and Amavisca, and G-G+ in Abraham).

For the medium cycle, HM.CLAUSE is offering Bastión F1, its first yellow California with resistance to nematodes and powdery mildew, recommended for plantations from the 1st of July onwards. With a plant that is stronger than the Deseo F1, it sets very easily and has high productivity. Its fruit, with G calibre, heavy and with a large amount of wall, is ideal for export. They bring great quality, even on secondary stalks and they are very similar to the fruit from Deseo F1, with four well-shaped quarters and an eye-catching lemon yellow colour. They have an added advantage for producers: scissor-free easy harvesting. Additionally, as with materials such as Morfeo F1 (larger-sized for the national market) and Deseo F1, the fruit endures on the plant, maintaining the quality.

For the late cycle, in addition to the abovementioned Anión F1, HM.CLAUSE has Katión F1, the variety that launched the ION range in 2017. It is a red California, recommended for plantations from the 20th of July to the 10th of August. Quite early, it brings the double aptitude for harvesting in red and green and does not suffer from silvering or cracking.