More varieties in all the types 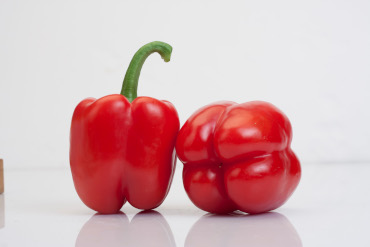 In Almeria, within the California type, two red pepper materials stand out. The first one is Menes (early-medium cycle), with transplants in El Ejido from the 21st of June to the 10th of July. Jorge Bervel, a sales technician from the company, states that after last year’s launch the sales have been very positive. “It is a productive variety; it is already widespread over the western and eastern regions.” Other advantages of Menes are its GG calibre, the absence of silvering or cracking problems, and its important homogeneity and uniformity, with eye-catchingly colourful, square fruits, both green and red. Added to all of this is a complete set of resistances to spotted leaf virus, L4, powdery mildew and nematodes.

For long cycles, Bervel recommends Ercina (transplants from the 15th of July to the 1st of August). The plant, which is erect and with medium-high robustness, includes easy setting and it is also early regarding ripening. It has no problems with blossom end rot, cracking or silvering; therefore, it is ideal for harvesting both green and red. Highly productive, it offers a very good final yield. The fruit, with G-GG calibre, are firm and uniform during their long cycle. Regarding resistances, these include L4 and spotted leaf virus.

In another segment, the orange California, the company’s option is Kuman, currently in its second year on the market. The recommended transplant dates concentrate on the second fortnight of July. With good robustness, Kuman stands out due to the quality of its fruit, mainly G (over 65%) from start to finish. “It maintains the calibre and the shape of four quarters, with an eye-catching bright orange colour and very high consistency, allowing it to be left on the plant without any problems,” Bervel indicates. As with Ercina, it has resistance to L4 and spotted leaf virus and does not have any silvering, cracking or blossom end rot problems.

Within the Lamuyo type, Ramiro Arnedo is launching Quijano, for transplants from the second half of July. The plant, which is very open and vigorous, gives the option of stem removal in terms of the plantation pattern. One of the advantages of its fruits is that they are very rectangular (they are not pointed) throughout the cycle, with setting in both hot and cold conditions and they are optimum for selling both green and red. On average, they weigh between 380-480 g, with good consistency. Without any silvering, cracking, blossom end rot or anthocyanins.

Another new development this year is Salvatore, an Italian pepper for harvesting green with transplants from the 20th of August to the 20th of September. The plant is very robust; it sets easily; it is very productive and has a fast regrowth, producing very uniform, straight and rough fruit, ending in a point. The length of the fruit ranges from 20 cm to 22 cm throughout the entire cycle. Regarding resistances, it includes L3 and spotted leaf virus.

But these are not the only new developments. In specialities, the company will reveal its developments in pre-commercial phases: Three-coloured mini peppers with high Brix levels and red and yellow chilli peppers to be launched in July. With the latter, Ramiro Arnedo is extending is very wide range of hot chilli peppers (it has ojo de pájaro, habaneros, the well-known padrón peppers…). A line that is seeing a considerable increase in demand, particularly in habanero and jalapeño peppers.

PrevA 10% increase in asparagus production
HM.CLAUSE, ahead of the trendNext
YOU COULD ALSO BE INTERESTED IN