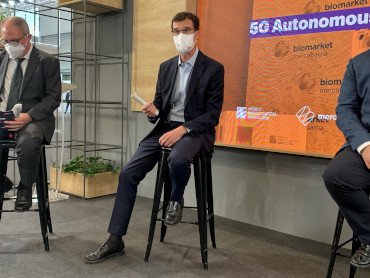 Mercabarna has started up a pilot scheme in which an autonomous robot carries out disinfection tasks to tackle biological contamination, including Covid-19.

The project tests the benefits of 5G connectivity to artificial intelligence systems with an autonomous robot that disinfects the areas that could potentially be contaminated by virus, bacteria and other harmful microorganisms in industrial installations.

Communications with the robot are immediate, thanks to the low latency of the 5G technology, which also provides speed and important scalability, making it possible to connect multiple devices.

According to Pablo Vilanova, Strategy and Innovation Manager at Mercabarna, “the tests carried out in the Biomarket show us that we can increase effectiveness in the current disinfection processes and strengthen them in spaces with difficult access.”

The new robot, which uses UV rays to eliminate any bacteria suspended in the air, can move around the facilities autonomously, thanks to its artificial intelligence algorithms. In just two hours it can eliminate 99.9% of the microorganisms in the Biomarket, which covers a surface area of almost 4.000 m².

This project has been developed by Mercabarna, Acciona, Orange and Mobile World Capital through the 5G Barcelona initiative and it is backed by the Generalitat de Catalunya.