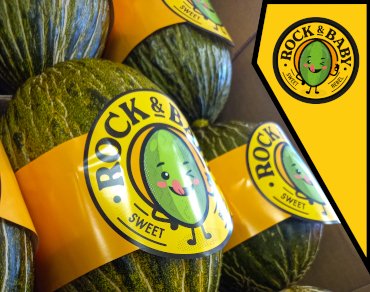 The AGF Group and Nunhems are launching a project together with which they intend to revolutionise the melon market, as they previously did with the Fashion watermelon.

‘Rocby, the Sweet Rebel’ is the latest important challenge by these companies: a convenience melon for the Spanish market with which they want to cover a requirement and attract a new segment of consumers: millennials. “Unlike what is on the market, which is usually the end of the stalks that do not reach the traditional Piel de Sapo flavour, with our partner we have managed to obtain a melon with new genetics that concentrates these smaller–sized fruit of between 1.5-2.2 kg,” explains Joaquín Hidalgo, general coordinator for the AGF Group.

In this first year of commercial sales, the first cuts have been carried out between the 20th-25th of June and the campaign will continue until the first fortnight of September. “We are starting in the Eastern Almeria region and then, we will move on to Murcia and La Mancha.”

In Spain, households are becoming increasingly smaller. In 2020, 56.2% had a maximum of 2 people and for 2035 this figure is expected to be over 61% (12 million households). Over 75% of the Piel de Sapo melon offer in Spain is sold in halves, with an increase in price per kg. Therefore, there is an opportunity to market small-sized melons, as consumers prefer to pay more for less weight (1.5-2.2 kg).

According to the consumer panel MCI, the consumption and purchase frequency of Piel de Sapo melon is lower amongst consumers under the age of 50 years and particularly low amongst those under 35. AGF Group and Nunhems want to win over this market share of almost 8 million Spanish millennials.

Rocby has a premium flavour, endorsed by consumer panels carried out with the Centro Tecnológico Tecnova. Its excellent flavour (13-15º Brix, fructose, glucose and sucrose) and its traditional Piel de Sapo aroma, reminiscent of childhood, as well as its elegant appearance, go hand in hand with excellent shelf life. Added to these advantages for consumers there are others for the producers, and the fact is that Rocby reduces costs compared to selling in halves because it allows savings in processing and it means there is less wastage. Therefore, it is more sustainable (it does not need covering in plastic film as sales by fractions do) and it brings greater food safety, also reducing waste in the household.

To promote it, AGF has opted for a very fresh, up-to-date branding, as well as an eye-catching, new 100% cardboard packaging.