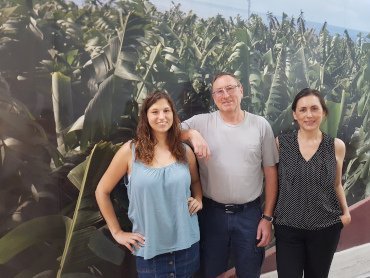 The Catalonian company will take on shortly the refurbishment of its office space and is launching its new paper bag packaging, in line with its sustainability policy

Five years have gone by since they turned the company upside down and completely refurbished its warehouse, located in one of the areas with most activity in the fruit and vegetable sector, the ZAC. This work involved rebuilding 12 modern ripening rooms, which work at different temperatures, according to the ripening needs of the bananas or plantains, with a capacity for 7,000,000 kilos per year.

This refurbishment included an original, colourful panelling of the building, following the colours reached by bananas during their de-greening process.

“Now we need to update the offices and make better use of the space because the administrative area is very absorbing and we need it to be more convenient,” José María Ruiz states.

In a sector where changes occur at great speed, the Catalonian company Plátanos Ruiz continues to maintain its essence, that is to say, its complete, unique specialisation in a single product: Canary Island bananas and plantains.

The banana is a product that sells well throughout the entire year, and in fact it is the fruit that reaches the highest sales volume on the market, but summer is its weakest season. However, due to its nutritional characteristics, the company has given us a series of tips to keep them at their best conditions regarding texture and flavour. Firstly, never expose them to a heat source during the unloading process; second, avoid bumps and letting the boxes fall to the ground because the areas of friction can become darker; and the third step, the conservation temperature for bananas to continue with their ripening process is between 10 and 20 degrees. As it is normal to store them in a room before displaying them at the point of sale, they must be covered with a tarpaulin at a temperature that is no below 10 degrees.

In the stores, the bananas should not be piled up, but rather laid out over a counter top or in a specific display unit. The end consumers must avoid bumps and knocks and not put them alongside fruit that give off ethylene, in addition to keeping them between 10 and 20 degrees.