Mercabarna, the first market in southern Europe to open a BioMarket 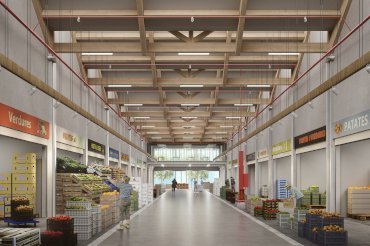 At the end of 2018, Mercabarna laid the first stone of the future BioMarket. This new infrastructure, which will be finished in February, 2020, is the response to the growing demand for this type of produce. This was confirmed by the data from the ‘Ómnibus Municipal’ 2018 survey: 91.5% of the population of Barcelona takes the local nature of the produce into consideration; 55.5% that it is sold straight from the fields and 54.2% that it is ecological. The forecasts indicate that the new market will distribute 20% of all the ecological fruit and vegetables marketed in Catalonia in 2021 (23,662 tonnes). A percentage that should rise to 50% in 2031 (78,100 tonnes). Although fruit and vegetables will be the main produce marketed, points of sale for other ecological products are also foreseen, such as meat.

The tendering period for the wholesale stands is now open and will remain so up until the 20th of September.

The characteristics of the project

The BioMarket will cover a surface area of 8,900 m². Inside, there will be a central corridor with stands belonging to wholesale companies and agricultural cooperatives on both sides, where the buyers will be able to walk, as well as a selling area for small local producers.

Outside, each side will have loading and unloading bays. With the building of the new market, which will cost 4,977,000 euros, the offer of ecological produce will be grouped together under a single roof. This centralisation will encourage the sale of these foods, because it will be much easier to find them in Mercabarna’s new food hall than it is at present. There are 40 companies that market fresh ecological produce in a consolidated manner in this wholesale market. Most of them are from the fruit and vegetable sector, but there are also companies from the meat sector and some that sell dried produce.

Finally, the construction of specific facilities will help with health/hygiene controls, along with those of labelling and traceability. Additionally, CCPAE (Consejo Catalán de la Producción Agraria Ecológica/Catalan Council for Ecological Agricultural Production), which audits and certifies the ecological agrifood products that are marketed in Catalonia, where companies must carry this organisation’s label, will have an office in Mercabarna’s Biomarket.

The seed of the bio market was planted between 2015 and 2016, when Mercabarna’s Trend Observatory identified the need to improve the sector specialising in ecological produce. The studies determined that consumers are becoming increasingly well-informed about the added value of this produce, and it is a category that is on the rise, both in the agricultural and in the distribution sectors. However, emphasis was made on the need to offer a more efficient logistics system and provide the availability of bio foods in regular buying centres. The BioMarket is aimed at making the distribution between retailers and the HORECA sector easier.

The future market of ecological produce ties up with the Milan Urban Food Policy Pact, promoted by the FAO (United Nations Food and Agriculture Organisation), of which Barcelona is one of the 100 signatory cities. As a result of this agreement, from which a strategy that endorses local food and a sustainable production such as ecological farming may be deduced, a network of districts in favour of healthy diet and responsible consumption was created.

PrevOnce again, Ruiz is refurbishing its space
Mercabarna’s sales are on the rise thanks to fruit and vegetablesNext
YOU COULD ALSO BE INTERESTED IN