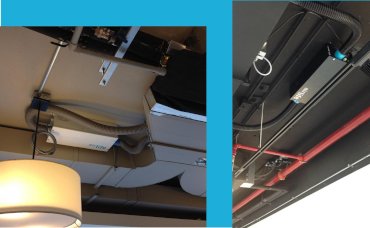 Oxyion has developed an efficient sanitization methodology for Covid-19 compatible with the presence and the work of employees.

The agrifood industry, and particularly the fruit and vegetable industry, have been evolving the improvement of their processes on the supply chain, but this pandemic has meant adopting more drastic prevention and hygiene steps. The goal: to reduce the possibility of contagions and very particularly regarding worker transit, presence and activities.

What does Oxyion’s technology involve?

Inside the Oxyion equipment, the same air that we breathe (that contains oxygen, nitrogen and hydrogen) is subjected to an electric field with controlled voltage and frequency, producing the ‘energised air’ that becomes the raw material of our sanitizer of air and surfaces contaminated with microscopic bodies.

In the scientific world, the set of energised air atoms and molecules are known as ‘Reactive Oxygen Species’ or ROS, which stabilise the Hydrogen Peroxide (H2O2) in the air.

Why is it perfect for fighting against COVID?

Oxyion has been developing this technology for years, using two different routes: air safety and treatment to conserve food, particularly fruit and vegetables. In the field of safety, we have ostensibly, and quickly reduced viruses such as Norovirus, Rhinovirus and ‘Flu by reducing their CFU (colony forming units) by 99.8% in minutes. It has also been effective against bacteria such as listeria, E-Coli or salmonella. All of this has been scientifically checked by different international research centres and in Spain by AINIA, of which we are members.

Regarding COVID-19, we have already carried out several elimination trials of this virus. In California, we drastically reduced the viral load in 15 minutes (4.32-log10 ) and in 30 minutes, it reduced 99.9% of the viral load on surfaces.

What is the main difference compared to other technologies?

We particularly concentrate on two: compatibility with the continual presence of people, as we stabilise the Hydrogen Peroxide levels within a range of 0.06 to 0.10 ppm, which is 90% below regulation values. The other idea is that Hydrogen Peroxide is the most effective biocide both recognised internationally and by the Spanish Ministry of Health and that no technology has been able to stabilize Hydrogen Peroxide in the air, at least up to now.

How is the procedure developed?

In short, we have a technology with different applications: biosecurity, food safety and lengthening of the shelf life of fruit and vegetables, contributing to a reduction in food waste. We do not generate any residues (we are consumables certified by CAAE and USDA Organic) and we use eco-sustainable technology.

How has this pandemic affected the company?

From the sales point of view and in the field of environmental purification, we have profited from it, as the companies that knew about and used our technology in Spain and Europe (over 80 clients) have asked us for information about installing equipment in handling rooms, changing rooms, dining rooms and offices and preventing the possibility of a mass contagion and worker protection. All of this has prevented many companies from closing due to mass contagions.

Where is the company present?

Internationally (over 5,000 installations and 20,000 appliances), it is present in 14 countries with 5 head offices in different countries in America and Europe to look after the demand. In Spain, we cater to all our European clients, where we are present in Portugal, Italy, Switzerland and Holland.

We own the technology and we produce the equipment in two countries: the USA and Chile.