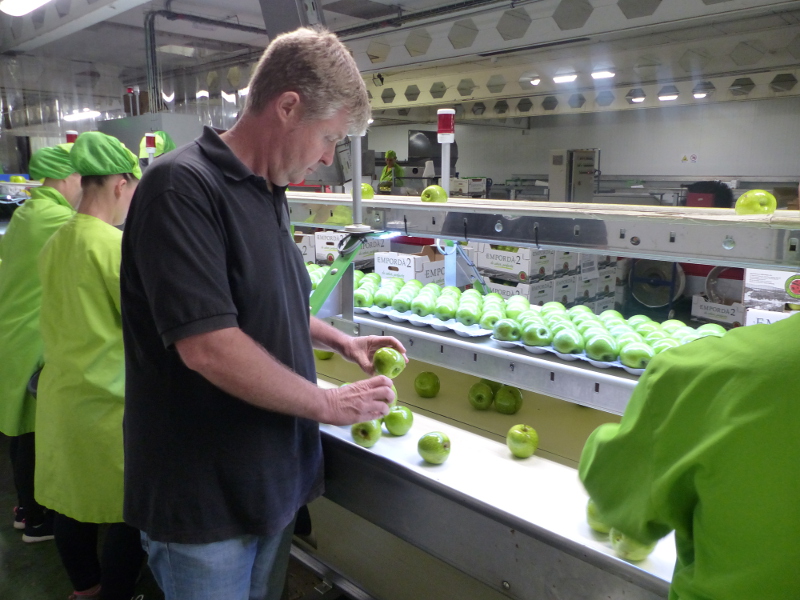 In view of the results obtained, the Catalan company is considering reaching 40 hectares of plantations with Tessa over the next three years

“From the first pilot scheme until today, Tessa has brought great satisfaction, therefore we have decided to continue opting for this variety,” Miquel Roig, Manager of the company comments.

At present, Tessa is on sale in an important Spanish supermarket chain. “The sales units reported are very similar to those of other apples where a great deal has been invested in marketing. I think that although people are not familiar with Tessa, they purchase it due to its visual appearance, and once they eat them they are not disappointed.”

In addition to Tessa, Frutícola Empordà is significantly interested in varieties from the FruitFutur project, as the trials that are being carried out are giving excellent results. “The 84 variety is one of the first that will be planted, but there will be more,”

Another of the new developments is ecological crops. “2022 will be the first year when we have a small commercial volume that will allow us to sound out the different varieties.”

The campaign that is now closing has been marked by some speculation and also by the price pressure imposed by the supermarkets. “In the months of March and April, some operators began to believe that there would be no fruit in Europe in July and they started buying and storing it. Now, apples have a lower price than in April. Playing the speculation game is worse than playing Russian roulette, because many factors intervene.”

“Although the produce shortage has meant that the campaign prices are slightly higher than last year, the battle has been tough and I think that this has not been passed on as it should have,” Roig adds.

The forecasts for the new season indicate a 15% growth compared to this year. With this increase, the marketed volume would be around 21 million kilos, possibly with fruit that are slightly smaller than average, depending on the weather conditions during the last fortnight before the harvest. “But the quality of the fruit does seem to be guaranteed, which, with the good sunshine at present, will reach the correct Brix degrees.”

The variety allotment increases equally throughout all the varieties: 40% in Golden; 25% in Gala and the remainder are divided up between Fuji, red varieties and Granny Smith.

A year has passed since the photovoltaic panels were installed at the central plant, and 30% of the energy requirements have been covered with them. “It was a good investment with the current energy prices sky high; the photovoltaic panels are not only a question of environmental sustainability, but also of profitability. Energy consumption by the cold storage rooms is really high in this business.”

On the subject of packaging, following society’s demands, this year they have carried out the first trials making cardboard containers by hand. Therefore, they are already thinking about a new technological investment regarding an automated line for cardboard containers, “amongst other reasons because the development of Tessa is already requesting that it should always be marketed in cardboard. In any event, we must study whether it is just a social demand or a real act by consumers as fruit purchased in cardboard is more expensive.”

PrevOperators are reducing orders
Apples for warm climates, a project made into realityNext
YOU COULD ALSO BE INTERESTED IN