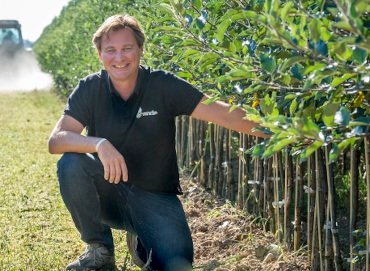 Viveros Escande, a company that is very active in hybridisation and marketing of different fruit varieties, holds the main licence in Europe for this apple

The new mutation, Gala Wildfire®RKD brings its harvesting date forward by three weeks ahead of most of the other known varieties. This mutation was found by Richard Callahan in Washington State (USA). A branch of the tree gave red fruit three weeks before the others, and the next year it happened again.

At the end of July, 2015, Benoit Escande, Manager of Viveros Escande, was in the United States and he quickly saw the potential of this new mutation. Shortly afterwards, the first trees were planted in France in order to try out the variety in European conditions, confirming very early ripening and very good colouring. The variety belongs to the attractive mutations with bright red stripes.

A tree that grows less

The tree of Wildfire®RKD is easily recognised as Gala. The growth is slightly less than for other Gala mutations (-10% a -15%), therefore the number of trees to be planted per hectare must be relatively high. Virus-free trees seem stronger than trees infected by virus, but this has yet to be confirmed. The branches of Wildfire®RKD are inflexible and relatively brittle if they are bent while growing. It is better to cut these branches, which are too erect and strong, at an early stage to allow the growth of a more horizontal sprout. In the warm climate of Washington State, but also in the warm weather conditions of Southern France, the variety does not seem to be more susceptible to sunburn than other varieties of Gala.

The remarkable element is that the flowering occurs a few days before other Gala varieties. Although the growth period is approximately two weeks shorter, this does not have any impact on the size of the fruit. It is very easy to determine the harvest date for Wildfire®RKD because the colour absorption is linear, linked to the starch regression. At the moment of the harvest, it is easy to distinguish the ripe fruit from the rest. The variety can be harvested in 2 or 3 runs. In all the trials carried out in France, the harvest was 18-22 days before the other regular Gala varieties. The flavour is undoubtedly better than the varieties that have not just been selected for their colour. The early harvest date of Wildfire®RKD does not adversely affect the flavour. Regarding prolonged storage, the trials are still in an early phase, but the first results seem to be hopeful in comparison with other varieties.

The first trial fields were planted with virus-carrying trees, although the variety has also passed on to heat therapy to ensure it is virus-free. In 2020, the Escande nurseries carried out the first harvest of these virus-free trees.“It is always exciting to make a virus-free variety, as it is never certain that the material will retain all the characteristics of the original variety. I am highly satisfied with the quality of the fruit on the virus-free trees,” Benoit Escande comments. “The colour of the fruit is very pleasant; the same as the standard we established for Wildfire®RKD and the very early harvest date has been maintained. In 2020, our pilot field was very early, which made it possible to harvest Wildfire®RKD apples from the 8th of July onwards. The starch regression occurred approximately from the 8th to the 10th, while with similar varieties such as Early Red Gala and Galaval, this regression had yet to start.”Wildfire®RKD is stable, but as with all the varieties, it requires a very careful selection of parental trees for the production of scions.

Escande and its associates have implemented a very strict selection strategy of scions on trees that produce fruit that adjusts to the original variety.Success“There are important opportunities for the earliest markets, which finally will be able to offer ripe Galas,” the executive comments. “Since the arrival of the very red, very early colouring Gala varieties, but that were not ripe, the market deteriorated in quality. Wildfire®RKD will change this. There is no risk in choosing Wildfire®RKD too early because the colouring is proportional to the ripeness.”For climate zones that are not suitable for the standard Gala, Wildfire®RKD is also a blessing. As it is harvested before Elstar or Conference, the variety is also ideal for staggering harvests. This variety has been planted in several trial fields in Europe and the results are conclusive.

Protection of the variety

On the 2nd of February, 2017, Wildfire®RKD obtained a vegetable protection patent in the United States. Consequently, the variety also enjoys priority protection in Europe and other countries in the UPOV system (Union for the Protection of new Varieties of Plants). Taking the legislation into account, Viveros Escande carried out indexing and thermotherapy to protect the mutations in Europe. “I am very certain that protection will be granted to the variety,” Benoît Escande affirms. “The differences with other Gala mutations, particularly in harvest dates, are really significant. The acquisition of a plant protection patent implies that each future early strain will have to be compared to Wildfire®RKD”.

Visits to the fields of Wildfire®RKD will soon be possible. If you wish to take part in these presentations, please do not hesitate to register on info@pepinieres-escande.com and you will receive an invitation.

Viveros Escande has an intensive hybridisation programme of stone and pip fruit. In apricot crops, the Escande varieties are easily found both inside and outside Europe’s borders. The company is also the creator of the new Club plum variety: Lovita® and of the organic Club apple variety: Juliet®. Escande has also contributed to Red Moon Company’s development, Swing® and other red-fleshed apple varieties.

For the past few years, Escande has held the main licence for the Gala RKD variety (Wildfire® brand), originally from the United States. From winter 2022 onwards, the trees will be able to be found in Spain.For further information, please contact: wildfire@pepinieres-escande.com

PrevAn opportunity to recover the Spanish home market
Grated tomato, now a reality at AvomixNext
YOU COULD ALSO BE INTERESTED IN