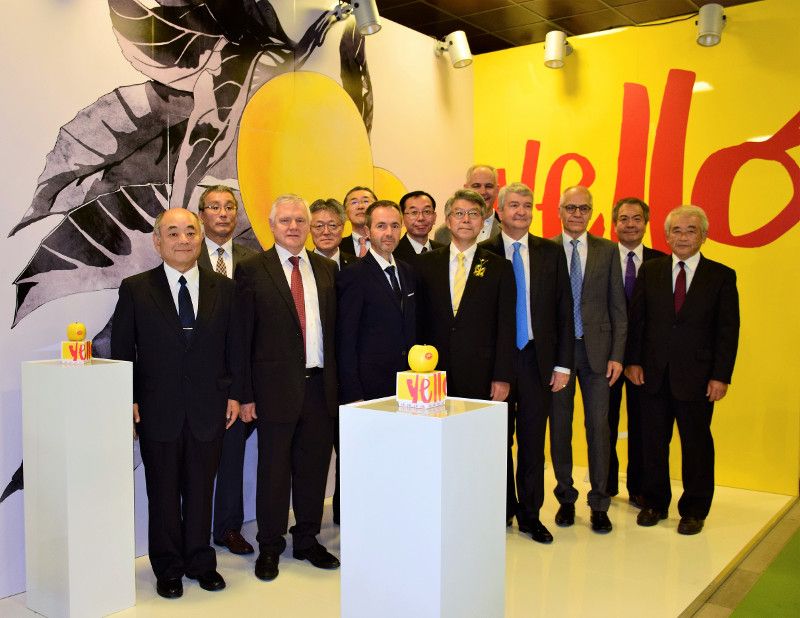 The apple created in Japan and exclusively harvested and marketed for Europe in Alto Adige – Südtirol.

The variety, marketed under the yello® brand, was created in Nagano in 1993 from a cross between the Golden Delicious and the Senshu. In 2005 the first tree was planted in Alto Adige – Südtirol, a well-known apple-growing area. In 2007 a trial agreement was signed between the Nagano Prefecture and the Alto Adige Variety Innovation Consortium (SK Südtirol), and this was followed in 2016 by the exclusive permanent production and marketing license for all of Europe and the Mediterranean basin, which belongs to VOG, the Association of South Tyrolean Fruit Growers’ Cooperatives, and VI.P, the Association of Val Venosta Fruit Growers’ Cooperatives.

“Innovation is key for the future of apple growing in Alto Adige – Südtirol”, comments Georg Kössler, Chairman of VOG. “The Innovation Consortium has collaborated with Laimburg Research Centre and the Alto Adige Consultancy Centre to coordinate the development of the new apple, which has now become a reality” – explains Arnold Schuler, Agriculture Councillor of the Province of Bolzano.

The Shinano Gold variety has been given a registered trademark: yello®, a name that highlights its distinctive colour. The lettering and logo recall the light strokes of Japanese writing while the pay off “The color of taste” reiterates the importance of the combination of colour and flavour. Today the yello® trademark is registered in 60 countries across the world. Between 2017 and 2018 over 150,000 trees will be planted in Alto Adige – Südtirol.

“We have identified an excellent opportunity: that of breaking new ground in the yellow apple segment, historically the realm of a single traditional variety – explained Gerhard Dichgans, Director of VOG – With yello® we also want to write a new chapter in the markets in which the Golden Delicious has for years been left in the shadows, such as in the UK and Germany.”

“The yello® story is a tale of the meeting of two very distant and different traditions, those of Japan and Alto Adige – remarked Josef Wielander, Director of VI.P – and people united by a single vision: that of creating a modern and successful apple that can conquer the markets.”

PrevOpera®: the first steps in a great project
Cutting-edge technology at VI.PNext
YOU COULD ALSO BE INTERESTED IN