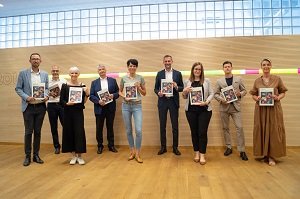 “For us as a global innovation platform, having a good content marketing strategy in place is crucial. This award is ultimately the result of the passion we poured into this project,” explains Director Thomas Mur. The magazine, which was published in 2020 to mark the Interpoma trade show focusing on the apple industry, was designed in collaboration with the Bolzano-based agency Exlibris and is printed on 100% apple-based paper.

Fiera Bolzano has won the Silver “Best of Content Marketing Award” for its “ipoma” magazine.

How can conflicts that arise between farmers and townspeople, between agriculture and tourism be resolved in a constructive manner? A controversial topic that, in South Tyrol, is particularly relevant to the apple industry. “If someone is shocked to hear that some apples are sprayed with pesticides up to 30 times per season, then as a farmer I should be saying: I understand why your initial reaction is to criticize my production methods, but please let me explain the wider context,” says Dr Willi Kremer-Schillings, known as “Farmer Willi,” keynote speaker at the 2020 Interpoma Congress, in his interview with “ipoma” magazine. He calls on farmers and consumer alike to carry their share of responsibility and urges for a more open dialogue.

This shows that the “ipoma” magazine – which was first published in November 2020 for the virtually staged Interpoma, a one-of-a-kind international trade show for the apple industry – does not shy away from critical content; in fact, it addresses it head on. The first issue profiles people who embody this economic sector which is so essential for South Tyrol, and who live their passion for apples: “Apple scout” Markus Bradlwarter, for example, talks about his global travels in search of new varieties, and distinguished apple expert Kurt Werth recounts his journey to the origin of the apple in Kazakhstan.

Published in English, German and Italian, “ipoma” highlights the expertise and worldwide renown of South Tyrol’s apple industry, for example by covering a research project currently being conducted at the Laimburg Research Centre in which an apple-based therapy is being developed to combat birch pollen allergies, or by presenting an extensive report on the future of South Tyrol’s apple industry.

The magazine’s diverse range of topics and its journalistic, fact-based concept were a prize-winning combination in the eyes of the panel of experts judging the “Best of Content Marketing Award 2021”, earning Fiera Bolzano the Silver award for “ipoma” – for exceptional corporate magazine in the “Customer Print Magazine B2B Trade/Consumer/Industry” category.

“Trade shows are increasingly turning into platforms and brands that must remain relevant 365 days a year,” explains Thomas Mur, Director of the Bolzano/Bozen Exhibition Center. “That means having a sophisticated content marketing strategy in place is key. This renowned prize is a grand distinction and proves that we are on the right track.”

The magazine’s editing appealed to the panel of judges, as did its layout. Its straightforward, sleek design, the eye-catching illustration on the cover and the bold journalistic photography forego the urge to paint romantic pictures of flowering apple orchards. Instead, they portray the reality with which the industry is faced: high-tech and innovation, international logistics and research in laboratories – and first and foremost, the hard labour performed by farmers and other people behind the apple. The choice of paper perfectly complements the publication: “ipoma” is printed on 100% apple-based paper, which was invented in South Tyrol. It consists of apple leftovers such as peels and pomace, which are by-products of the juice production process, for example.

Fiera Bolzano designed the “ipoma” magazine in collaboration with the Bolzano-based agency Exlibris (project managers and editors: Valeria Dejaco and Silvia Oberrauch), the author and magazine developer Lenz Koppelstätter (editor-in-chief) and the designer Nina Ullrich (editorial designer and art director). The province’s two largest producer associations – the Association of Val Venosta Producers of Fruit and Vegetables (VIP) and the Consortium of South Tyrolean Fruit Growers’ Cooperatives (VOG) – gave their support to help turn the magazine project into a reality. The role of expert consultant was carried out by the coordinator of the Interpoma Congress, Gerhard Dichgans, who had served as VOG Director for many years.

The “Best of Content Marketing Award” is presented annually by the Content Marketing Forum, Europe’s largest industry association in this sector. Panels of experts judge around 700 entries in the corporate communication segment, which includes customer magazines published by companies such as Audi, Tchibo and Lufthansa. While the winners of the Silver and Gold awards are usually announced during a gala event, this year’s awards ceremony was entirely virtual and was moderated by the news presenter Sandra Thier (n‑tv, RTL).