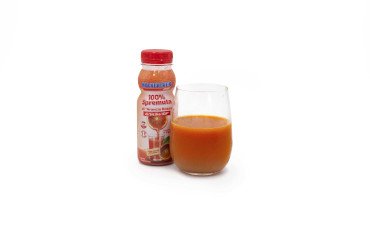 Oranfrizer has become an integral part of the international Unifrutti group and continues to nurture its future growth in Sicily, the most fruitful island in the Mediterranean.

Its core business is the blood orange, alongside other prized citrus fruits which ripen in the Catania plain, overlooking Mount Etna, Europe’s tallest active volcano. In addition to citrus fruits, there are 100% NFC (not from concentrate) juices, as well as many other fruits and vegetables coming exclusively from selected areas in Italy, such as Siracusa, Pachino, Mazzarrone and Leonforte.

As a natural source of Vitamin C, oranges are increasingly sought after, topping consumers’ shopping lists in 2020 and 2021.

Last year, oranges placed second in the ranking of the most purchased fruits in Italy, at almost 480,000 tonnes (Source: CSO Italy processing of GFK Italy data)

Purchases of family-size orange juices are worth 81% of the NFC market in Italy (Source IRI – June 2021 – Channels: total Italy+discount+cash&carry).

Despite all the difficulties caused by the outbreak of the pandemic, Oranfrizer has been able to guarantee the availability of all of its products in Italy. Thanks to the Unifrutti Group’s commercial strategy, Oranfrizer is now also reaching many overseas markets, from Japan to China and the United States, as well as the main European markets.

The commitment in this field will be described at Stand 012 in Hall 4 at Cibus 2021. Real citrus trees will be on display, and you will have the opportunity to taste the authentic flavour of all the Sicilian fruits which have simply been picked and squeezed.

It will be easy to become familiar with Oranfrizer’s entire supply chain, because it is short and carefully developed. It will be described starting from its roots, which are nourished by innovative technological systems that monitor their daily needs with an increasingly prudent use of resources, in particular, water. These are crucial aspects of Unifrutti Group’s global sustainability project.

Unifrutti is now able to meet the demand for citrus fruits 365 days a year. Oranfrizer’s harvests are integrated with a careful selection of the best crops in the southern hemisphere, namely from South Africa and Argentina. This allows Unifrutti to offer a constant supply of citrus fruits, even during the off-season, with the highest quality always being guaranteed.

Aldi Suisse: goodbye to fruit and vegetables by air