Recognised as the Best Brand of the Year, the Italian company is experiencing a ‘sweet’ moment, with the spotlight on sustainability and growth in Spain 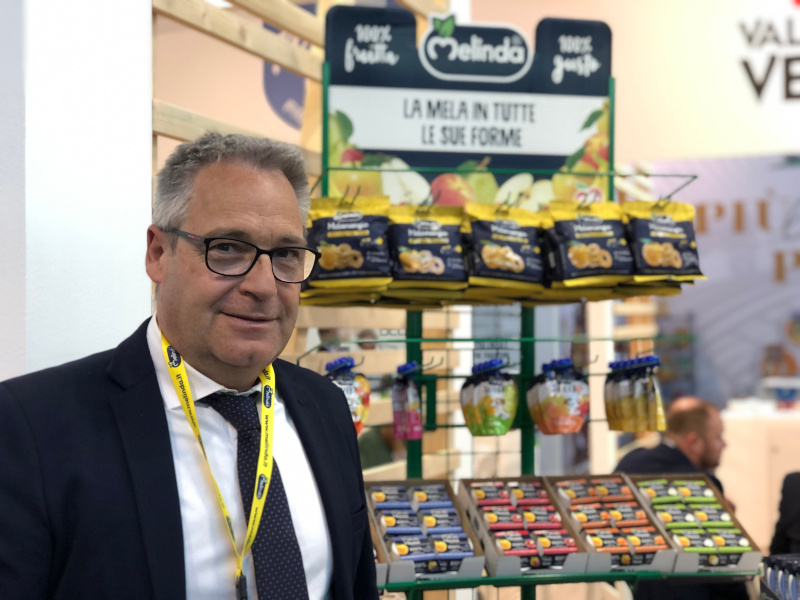 The Melinda Consortium has good reasons to celebrate. Recently, the company has been recognised in Italy with the ‘Think Fresh Brand Award’ 2022, a prize that certificates the best brand in the fruit and vegetable growing sector, beating other prestigious brands such as Chiquita or Del Monte with a visibility of 41%. Complete “pride and honour”, as commented to Fruit Today by the chairman Ernesto Seppi, appointed on the 13th of January this year during the Board Meeting. “This prize is the result of the joint work of the Board of Directors, the Management team, the Marketing team and the 4,000 families that work at Melinda: mountaineers who, thanks to their effort and professionalism, produce very high-quality apples and have brought the Melinda brand to the first place in the ranking.”

In fact, talking about Melinda means talking about the indisputable leader of apples in Italy: “almost one apple out of every two that are sold in our country is ours.” Its annual production is around 400,000 tonnes and 75% of its sales remains in Italy. Of these figures, 20,000 t are bio, grown on 300 hectares of production. A line that is still a market niche and on which they are working, without losing sight of the real demand and the producers’ profitability. “Ecological production must be based on something real, not just a slogan.” For this reason, aware of the drop in consumer economic potential due to Covid and the side effects of the war in Ukraine, the farmers, even though they had to put the brakes on the development of their bio project, concentrated themself on a surface of 5 ecological areas which have become like bio-districts.

The area where they are moving forward at a fast pace is their commitment to sustainability. “We self-produce 5 millions Kw/h, with solar panels that’s more than 10% of the Melinda’s needs. And now we are working to double the surface area of renewable energy”, Seppi states. Likewise, the Melinda’s staff are undertaking the fourth phase of their Hypogeum Cells project, Underground Cells or caves excavated in the rocks of the Dolomites where they keep the fruit in cold storage in a controlled, underground atmosphere. “Thanks to this, we manage to save 30% energy compared to conventional cold storage, avoiding the visual impact and saving in terms of land. The outside is used for apple crops and the inside of the mountains for their conservation.”

Another example of sustainability and innovation is its R&D project to produce bio-plastic from apple sugars. This material, created in collaboration with Novamont, in a not-too-distant future could reach the supermarket shelves, with apples in containers made using sub-products from other apples.

Going for the Spanish market

Within its growth strategy, the consortium has put its spotlight on foreign markets, in particular on Spain, where it has been gaining market share, quadrupling sales compared to 10 years ago, although they arrived later than their competitors. Melinda branded apples are now distributed in the most important wholesale markets of Spain. Moreover, they are gaining more and more presence in the retail as well.

“Spain recognises the value of our apples, with high Brix level and excellent organoleptic properties, not only in Golden, but in all the varieties we are producing. Spanish consumers are very similar to Italian consumers” says in conclusion Mr Seppi.

PrevThe latest from Bejo, also bio
“Produce shortage will wake up the market”Next
YOU COULD ALSO BE INTERESTED IN