The Finnish Port System is new honorary member of A.L.I.S. 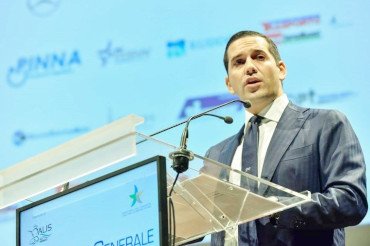 The Logistic Association of Sustainable Intermodality continues to expand in Europe and the Baltic Sea with Helsinki port system and the Port of Hanko.

“I am very proud of the growth of ALIS and its network. And I’m even more pleased that our daily commitment produces benefits not only in Italy but also in the rest of Europe. The adhesion of two of the main port hubs of northern Europe, formed by the Port of Helsinki – South Port and East Port – and the Port of Vuosaari and, in the south of Finland, the Port of Hanko (a few days after the accession of the Croatian port of Zara) pushes us to continue to invest in the internationalization of our cluster for the benefit of the activities of all those companies that join our associative project ”.

The President of ALIS Guido Grimaldi comments on the new important adhesion to the Association, as honorary member, of the port system of the Finnish capital and the port of Hanko.

As is known, the Helsinki port system last year produced, thanks also to the members of ALIS, impressive numbers both in terms of passengers, reaching the head of Europe, and rolling freight (trucks, trailers), creating positive economic effects positive on the Scandinavian-Mediterranean Corridor which, right from Helsinki arrives to La Valletta (Malta), passing through the Port of Palermo, another honorary member of ALIS.

On the other side, as the southernmost port in Finland, Hanko offers the fastest connections to all the major European nations, including Germany, Poland, Belgium, The Netherlands, Russia and the UK. Thanks to the decisive choices of ALIS members, the port of Hanko has more recently seen its biggest source of growth originating from unitised cargo which, due to its geographic location, it is able to serve efficiently, safely and in sustainable way all year round.

“Our associates develop an important business in the Baltic area by investing enormous resources in the sustainability of freight and passenger transport systems. Therefore, cooperation with the Port of Helsinki, the Port of Hanko and the entire Finnish intermodal system was a duty. For this reason we presented the peculiarities and objectives of our association to the CEO of the Port of Helsinki, Mr. Ville Haapasaari, and the CEO of the Port of Hanko, Mr. Anders Ahlvik, who immediately joined our organization due to its development in a European key. I believe that the growth and internationalization of our companies must be encouraged with great determination and, to do so, we must take courageous and strategic steps.

“ALIS, with its ALIS EUROPE department, is setting up the main international transport players, bringing together the logistic nodes, such as ports and interports, with all the operators in the sector who act daily on the European corridors, effectively reducing the geographic and economic distances – concludes President Grimaldi – The fact that Italy has a strategic position in the Mediterranean area must not make us forget that our companies can intercept also the flows of goods to and from Northern Europe. In fact, the Scandinavian-Mediterranean represents a corridor for Italy where important movements on transport arteries converge, capable of generating great opportunities for our economy. We will continue to work diligently to connect Italy more efficiently to the rest of Europe”.