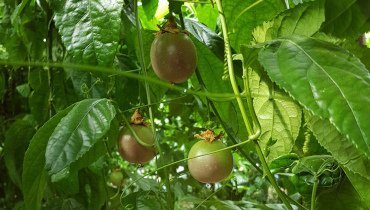 This company from Malaga, Bioalgarrobo, specialising in ecological fruit and vegetable growing, has added passion fruit to its range and this year it expects to produce around 80,000 kg from March to September. “We have managed to adapt the crop to the region with a yield of 3kg/m² in greenhouses,” the manager, José Carlos Varela, told Fruit Today. This product has joined others that are already included in their offer such as litchis and dragon fruit, both with 10,000 kg each, along with papayas.

Its sub-tropical division now occupies 150 ha of land, to which another 150 ha of open-air land are added for crops such as potatoes, melons and watermelons, and one of the products that is on the rise, the sweet potato, of which they produce 1 million kg. As a new development, they have 5 ha of avocados in greenhouses, mainly with the Lamb Hass variety, although they are trying out another earlier variety, the Mexican Carmen, for harvesting from October onwards. Along with its early harvesting, Varela emphasises Carmen’s greater productivity (20,000 kg/ha) and its important external similarity to the sector’s ‘star’, Hass.

In counterseason, its avocado production moves to Antioquia (Colombia) and the sweet potato, pumpkin and mango production moves to Senegal, through collaborating partners. “Our technical service carries out exhaustive controls to guarantee the authenticity of the bio crops and prevent any possibility of contamination,” the manager adds.

For this 2019/20 campaign, Bioalgarrobo expects to reach a production of 8 million kg including all its references, with an invoicing of around 12 million euros.

Bioalgarrobo’s commitment to the environment is deep-rooted in its daily work, starting with its self-supply installations, through solar panels, to the selection of biodegradable packaging and laser labelling. “We are a company that produces little pollution, with virtually no carbon footprint.” A philosophy that, without any doubt, is opening up doors on the markets it is aimed at: Germany, France, the United Kingdom, the Nordic countries… to which it exports almost 95% of its production, with presence in the main supermarket chains (Rewe, Edeka or Biocoop, amongst others).