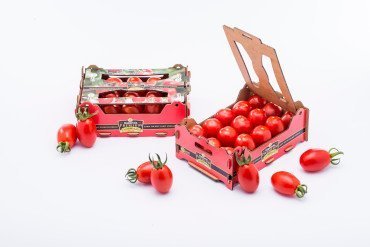 Caparrós is spotlighting its anniversary and everything it has achieved, such as the two ‘Flavour of the Year’ awards

2019 has been a year to remember in the history of the Caparrós Group for many reasons. And at this edition of Fruit Attraction all of them will be on show. The company led by Pedro Caparrós will focus its efforts on the celebration of the 35th anniversary of Caparrós Nature, a landmark date that the company has commemorated with many events with its team, clients, farmers, authorities and the society of Almeria as a whole. In these celebrations, it has shown its untiring commitment to quality, excellence and flavour. But it has also shown its commitment to health through the benefits of its products and the promotion of healthy living habits, which back in the day, won it the “Naos Strategy Award” to business initiative in 2015.

At the Madrid trade fair, other recent accomplishments may also be ascertained, such as the ‘Flavour of the Year’ Award for two of its most emblematic products, the plum vine cherry tomato, Lobello Caparrós Premium, the flavour of which has won over the most demanding palates of European consumers, and the Seedless Watermelon Caparrós Premium, widely consolidated on the market as a reference for quality and flavour, as it is harvested at the perfect point of ripening with high quality standards and its sweetness and texture make it different from the rest.

The ‘Flavour of the Year’ awards are not the only milestones that have been achieved recently. Since January, the company from Almeria can boast of being the first in the sector on a regional level to obtain the ‘Healthy Company’ certification from Aenor. This stamp, the first of its kind in the world, is based on internationally recognised criteria, as well as a continuously improving methodology, which understands health as a complete state in which the physical, mental and social wellbeing all come together.

The team from Caparrós Group is waiting to greet you at its exhibition space at Fruit Attraction, located in Hall 9, stand 9D09.