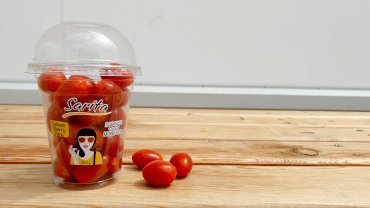 Under the slogan ‘Savouring every moment’, once again Sarita will be Looije’s focus point at Fruit Attraction (7E04B). But this time, they will push the concept even further, reinforcing the product’s versatility in the kitchen. They will do this using recipe booklets, videos and graphic designs on the stand.

In 2019, before the final balance sheet has been closed, the forecast is to reach 7 million kilos (1 million more than last year) including all their references, with an invoicing of 13 million euros. Looije, which already exports its tomatoes to 14 countries, is not only increasing its volumes, it is also extending its market share, and Sweden, Portugal and the Arab Emirates are among its new destinations.

Now it has 12 companies cultivating its star product, Sarita. And it is about to extend its greenhouse farms in Looije Águilas, with a three-phase plan. The first phase has just been concluded and it means the start up of 5.2 h of crops. In 2021, the second phase will take place and the last one will start in 2023. When all of this is ready, they will have added another 19.2 h on a 28 h farm (including an irrigation control room, cafeteria, office, reservoir…), and it forecasts increasing produce by 1,040,000 kg compared to the current production. An ambitious investment that will result in job creation, as they expect to have 1,000 working directly for the PO Looije in tomato crops as a consequence of this project.

The new greenhouses are equipped with more technology to optimise the resources: automatic climate control; better use of water with rainwater collection and reuse through treatment that gives it a longer useful lifespan; and a groundbreaking new air hydroponic crop system, that is placed a few centimetres from the soil, below the humidification (instead of spraying), to prevent the fruit from splitting.

Amongst the new developments that they are preparing are also the marketing of a new premium cherry tomato brand that will be presented at the end of the year and they are also working on a pilot project with vending machines for cherry tomatoes.

The company’s growth strategy involves growing to reach 12 million kg over the next five years.

Prev35 years of excellence
Monterosa, a collection of sensationsNext
YOU COULD ALSO BE INTERESTED IN