His elegant bearing, along with an air of shyness, gives him a definite air of aloofness, but this is far from the truth when you get to know him. He is a discreet, very sentimental person. We have often seen him with tears in his eyes when he talks about his family or his company. 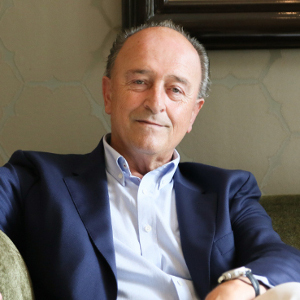 His elegant bearing, along with an air of shyness, gives him a definite air of aloofness, but this is far from the truth when you get to know him. He is a discreet, very sentimental person. We have often seen him with tears in his eyes when he talks about his family or his company. I know that he does not like to boast about anything and it is difficult for me to convince him to talk about some subjects, particularly everything related to the social causes in which he is involved.

He is passionate about mechanics. He says he likes anything that moves: mainly machinery, watches and cars. He has five impeccable vehicles, because he has not wanted to sell any of them since 1994.

Born in Paiporta (Valencia) 66 years ago, he is married to Toña, a prestigious gynaecologist. He feels that luck shined on him when his only son, Robert, came into his life. Today, this young man has turned into his father’s pride and joy, and the future of the company is guaranteed.

He feels deeply Valencian and lives it every day, since he rarely talks in Spanish to anyone who can speak his own language.

How do you remember you childhood and youth?

Ufff. That is a long time ago. I am a regular village “xiquet” (boy), who played in the street. We used to go to the gully in Paiporta to play with ‘chapas’(bottle tops),‘churro-mediamanga-mangoentero’(a leapfrog-like childhood games) or football and, when we managed to get a real football, we were ecstatic.

Afterschool I used to run to a bicycle workshop, where sometimes they also repaired motorbikes and the owner let me mend anything: a chain, a pedal, etc. I spent many happy hours there and I always arrived home late, with the subsequent telling off by my mother.

My father was the son of a farmer and in the 1940s he set up a fertilizer and seed business, which led to the potato business. At the age of 15 I told him that I wanted to start working.

From what I can see, it’s not just the company that has turned 50: you have also been working for 50 years. A double celebration. Don’t you think that 66 is a good age to think about retiring?

The truth is that I have never thought about it, as I still have enough energy and I like my work. Also, my son is only 19 years old, so he still has a few years to go at university.

But your son has already made contact with the company.

Robertcomes to the company some days if he doesn’t have any university classes and, in order to get to know the company in depth, he has spent time in all the sections and takes part in all the meetings.

And this is very good for him when making practical developments. The other day he was very happy with a piece of work for which he had got B+, although I told him he should make more of an effort because he has the capacity to get an A+ and he should work to obtain this.

You live and work as a permanent Valencian, amongst other things because you don’t stop speaking your language.

In Paiporta everyone spoke Valencian, although at that time anyone who came to study in Valencia used Spanish because it was looked on more favourably. I remained true to my decision because it is a very rich language.

Your passion for mechanics has led you to collect cars. Can you explain this to me?

As I explained, as a child I loved mechanics. I spend 2 hours every day in my car just to go to work. I enjoy driving a great deal as I can get the best out of each vehicle and I like the feeling of changing from one to another.

I have certain routines in my car, such as listening to the newson the Cope or Onda Cero radio stations in the morning and at midday, and in the afternoon I always listen to music.

You also wear a watch that is incredibly “mechanical”.

Watch mechanics is another of my hobbies, which is why I don’t like digital watches.

This is the reason you wear this skeleton watch?

What I like about this model is that you can see the mechanism and the magnificent workings of the components from both the front and the back.

So you have an advantage if a problem occurs on the production lines.

I know how all the machines in my company work. Yesterday we were working on the start up of the first phase of machinery renewal and I was with the technicians. In fact, I have to go and find a component after this interview.

Let’s talk about something else. The other day, on your company’s anniversary, I saw a man who looked very much like Vicente Ferrer and it reminded me that on the Christmas cards that you send me there is a mention of the collaboration with the Fundación Vicente Ferrer. Was there a reason for this?

Yes, you are right. His nephew Jordi, who looks very much like his uncle, honoured us with his presence and he came to the event to congratulate us.I have a very good relationship with the family.

What has it meant to be involved in a humanitarian project of this type?

The truth is that going to India and seeing the work they perform touches your soul. We have taken part in a transformation project for barren land in Anantapur.I wanted to know what we had done in situ and I went with Vicente Ferrer.

Whatever you do for them, over there it is multiplied by one hundred. When I got on the plane, on the way home, I promised myself that every year whilst I could I would collaborate on the Fundacion’s projects.

But I have been told that you are involved in many social causes.

(I now come across the man who does not boast about what he does and wants to be brief)I think that all of us who have had a good life should be involved in humanitarian organisations or causes. I feel better in myself and it brings me great peace of mind.

PrevADORA, a tomato with flavour certificate
The Fashion watermelon stand promises to dazzleNext
YOU COULD ALSO BE INTERESTED IN