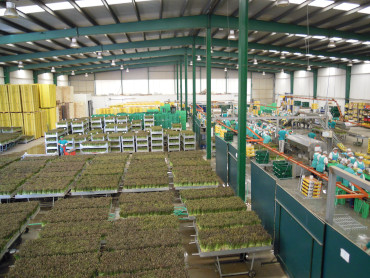 Gallombares continues working on the opening up of new destinations for its asparagus, which has reached an additional 1 million kg during this campaign due to the incorporation of Agrolachar

The cooperative from Granada Los Gallombares is attempting to broaden its commercial horizons outside Europe. “We are working to open up markets in Singapore and Israel,” Mónica Cuberos, Head of the Marketing Department, advances to Fruit Today.

In spite of the restrictions that they have had to get around due to Covid-19, the company has not lost sight of its sustained growth and this year it is increasing its asparagus volumes with a total forecast of 9 million kilos, thanks to the incorporation of Agrolachar, which has meant a production injection of 1 million kg. With all this, the cooperative’s almost 800 members are now cultivating 2,400 ha in western Granada.

The season started later than usual as a result of the rain and cold weather at the end of December. The weather conditions caused the crop to slow down and for there to be a lack of volume at the start of a campaign that Cuberos qualifies as “different”, and which has meant working at ‘half-speed’ in mid-April. There has been a fall off of around 20-30% on these dates compared to last year. A situation that has caused “unpleasant situations, as we have had to say that we couldn’t serve all the product that we would have liked to at this point.”

Los Gallombares markets green asparagus, adapting 100% to each client’s requirements: loose, in bundles or tubs and with 100% biodegradable packaging that now covers 80% of its production.

To guarantee maximum freshness and product quality, the asparagus is harvested daily. Once in their installations, the product enters a processing line, which was updated a few campaigns ago. This year they have once again invested in improving their facilities, with the accent being placed on sustainability through the investment in solar panels, the source of 85% of the energy that they use.