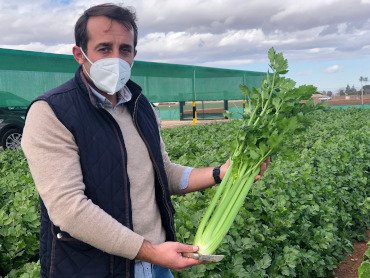 Ramiro Arnedo is highlighting its benchmark variety of Little Gem at the Murcia open days.

Early, with a round heart, wide and compact and with a rosette that “embraces” the heart area very well, Cerler is a benchmark in Murcia in the Little Gem lettuce segment, according to Roberto Sabando, Sales Delegate in Murcia and Alicante. Ramiro Arnedo’s variety continues to gain followers thank to its quality, flavour and versatility, with a wide range of transplants going from autumn to spring.

Alongside this material, the seed company has shown Candanchú (second year on the market), for the same cycle, but that differs by being slightly larger and more stylised. Added to this, it is easy to peel and very versatile to use (heads and hearts).

They are also adding an important new development in the typology, revealing the red Little Gem line with the pre-sales varieties AR – 29442, AR – 29445 and AR – 29446 that continue in winter, spring, and summer and in some regions, also for autumn. Amongst their advantages are good resistance to downy mildew, aphids and sprouting prevention, according to Jesús Bayano, a Development Technician and Leafy Crop Manager.

In the Romaines typology, Ramiro Arnedo has an extensive portfolio of produce for the national market and for export, which includes materials for spring and summer such as Formigal, Baqueira and Astún with resistance to Tip Burn, and good flowering behaviour.

In the celery line, in addition to the well known Oregón, they have launched the new varieties, Alaska and Nebraska (spring-summer), with a more compact head and high internodes that allows them to be sold as whole pieces and bagged stems.

The endive offer is being extended with the curly AR – 21010 (autumn transplants), which brings reasonable volume with a high white rate, compactness and tolerance to ribbing.

And although it is still in an initial phase, they advance that they are going to start a line of Icebergs for February transplanting (to date they only had summer transplant varieties) with complete resistance to downy mildew and Nasonovia aphids. The first variety is AR – 29441, which is large in size, compact, mid-green and very healthy.