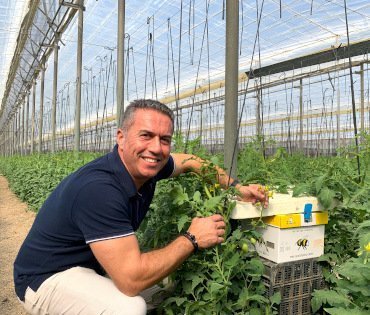 The start of the current agricultural campaign could not be more positive. Koppert confirms a rise in the release of natural enemies in the greenhouses.

Both during the last campaign and at the start of this one, the greenhouse surface area with biological control continues to rise. The expansion is unstoppable and there is no turning back for the intensive crops, but there is still work to do until we achieve the goal of reaching 100% of the crops under plastic.

Which productions are at the head in the use of auxiliary fauna?

Peppers hold the outright leadership, as over 99.6% of their production is managed using biological pest control. In second place are aubergines with over 70% of the production and tomatoes come third with over 61%. The rapid growth that the techniques are experiencing in crops such as aubergines, courgettes, cucumbers and beans is very interesting.

Why is there a drop in tomatoes?

Two years ago, biological control in tomatoes dropped by 20%, although it is once again beginning to recover. There was a slow down, partially influenced by biased information that made farmers question its efficiency. After the problems suffered, particularly with Tomato Leafminer, producers have come to understand the importance of respecting the correct dosage throughout the entire cycle. The old concepts of immediate action and effect as seen with conventional farming based on agricultural chemicals are no longer valid. There is no turning back for biological control in tomatoes and we have the categorical support of the main marketers. Accordingly, CASI’s important example stands out, which this year has established the release of Nesidiocoris tenuis as an obligatory step to control Tomato Leafminer.

What importance do micro-organisms have for Koppert?

A great deal. If the ‘bugs’ were the stars of the first green revolution, micro-organisms are starting the second phase, where we have the chance in our hands to change farming methods forever and make intensive production under plastic compatible with respect for the environment. On a global scale, Koppert has decided to make an important investment to put beneficial micro-organisms within the reach of farmers, which, in the soil, complete the good work carried out by auxiliary insects in the aerial part of the plant. Trianum is a good example of this, a biological fungicide that is unique on the market, which contains a hybrid strain of the beneficial fungus Trichoderma harzianum. It is an exclusive strain, patented by Koppert and it is highly efficient in all types of soil. It has been a commercial success, for seedbeds, greenhouses and open-air farming.

Are you innovating in bumblebee hives?

Of course. We brought our first hives over 25 years ago and since then, our brand NATUPOL® has been constantly evolving. At present, we are very satisfied with the latest version, NATUPOL EXCEL®, as we offer the best quality on the market and the highest yield per bumblebee.