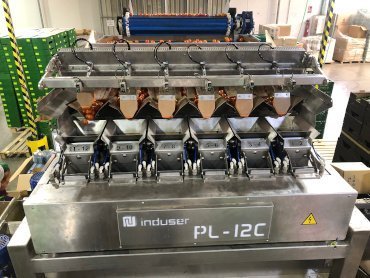 The war against plastic is causing important changes in the sector at all levels. Consumers are demanding more sustainable packaging and, although recyclable plastic is one of the most frequent answers, “paper bags are being requested more and more for products such as grapes, for example,” according to the manager of Induser, Pedro Martínez. His machinery company is carrying out trials with new lines for sustainable packaging. On this point he states “packaging manufacturers are developing bags that are more resistant to withstand automated packaging, in order to not have to go back to hand packaging.”

Induser’s new packaging lines have incorporated adaptation to ecological cardboard packages, and, optionally, they can feed the bagging machine with individual sustainable bags (both recyclable plastic and paper). They have also launched a line of horizontal bagging machines.

The first of these is the mixed horizontal bagging machine for multi-produce, particularly designed for cherry and kumato tomatoes and that can also be used for Canary or plum types. It has two bagging carts with the same weighing device, one for cherry tomatoes and another for MM calibre tomatoes, packaged by pieces of 2, 3 or 4 in extended tubs.

Other launches include the high-production horizontal packaging machines for stone fruit and cherries, “with the same services as the previous machine (extra-delicate processing, associative weighing, multi-format system), but conceived for higher production due to its triple dispensing and filling system.”

Finally, Induser is launching a bagging machine for sustainable bags, either recyclable or paper, with zipper or heat-sealing, indicated for cherry tomatoes, MM tomatoes, mini-peppers and stone fruit. In this case, Martínez explains, “it may be connected to a packaging machine for the complete automatic process.”

All of this may be seen on its stand at Fruit Attraction in Hall 9, 9C15A.