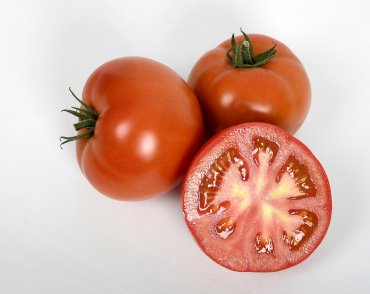 Seminis is offering three white-necked varieties that are following in the wake of Matías: SVTH1214, the new Eterei and SVTH2900.

Tomato producers from western Andalusia have continued in the same line during this pandemic autumn. The region, covered mainly by large calibre GG-GGG white-necked beefsteak tomatoes for the national market, is maintaining its surface area and in recent years it has opened up to large calibre (250-300g) plum tomatoes, also for the home market. “Looking to the spring, there is uncertainty; no great changes are expected, however, because most of the producers uphold the family economy and they mainly market through cooperatives and packaging companies,” according to Jose Luis Carrasco, sales manager for western Andalusia at Bayer.

Bayer is the leader in the large calibre beefsteak tomato segment with Matías, which has now been on the market for around 12 years, and it has also laid its cards on the table with another three materials to respond to each farmer’s specific requirements: SVTH1214, the new Eterei and SVTH2900.

SVTH1214 was launched three years’ ago and it has taken over a large part the sales of both Matías and those of its rivals because it has a large calibre throughout the entire cycle (average of 250-270 g/fruit). It is very uniform, it is ideal both at auction, due to its eye-catching shininess and very small pistilar closing, as well as for calibrating machinery, as it has minimum wastage. It can be harvested both green and red, it is very hardy and has a good harvest. Along with the normal resistances (ToMV, Fusarium, verticillium, nematodes), it has a ‘bonus’ with spotted and Fulvia. Its open plant minimises any problems with mildew and botrytis in autumn transplants. As the plant has a medium hardiness, Carrasco recommends giving nitrogenous fertilizers at certain moments. “The variety is ideal for spring and autumn transplants, always in short cycles, on its own plant, although it may be grafted with DR0141TX on farms with soil problems or to extend the cycle.”

Eterei both complements and is an evolution of Matías, and it differs due to its greater uniformity, production, calibre and improved pistilar closing. It has the typical resistances, and this includes spotted. It has a very chunky calibre GG-GGG (270-340 g) and it stands out due to its excellent flavour, firmness and an eye-catching deep red colour (although it can also be harvested green). In trials, the Brix level is significantly higher than other materials such as Matías. The plant is very balanced and has a medium hardiness. The variety is mainly indicated for spring and autumn transplants in short cycles.

On the other hand, SVTH2900 is a different concept. It is highly generative and although it is very hardy, it has high setting and production rates, therefore it requires different handling. It stands out for its amazing production and pistilar closing. Its fruit have a very high quality (shape, colour, without splitting…), it has GG calibre. It is very firm and is ideal for harvesting both green and red, as occurs with the other materials. Along with the typical resistances, it is resistant to spotted, nematodes and Stemphylium. It is particularly indicated for autumn transplants, although it also works perfectly in the spring.