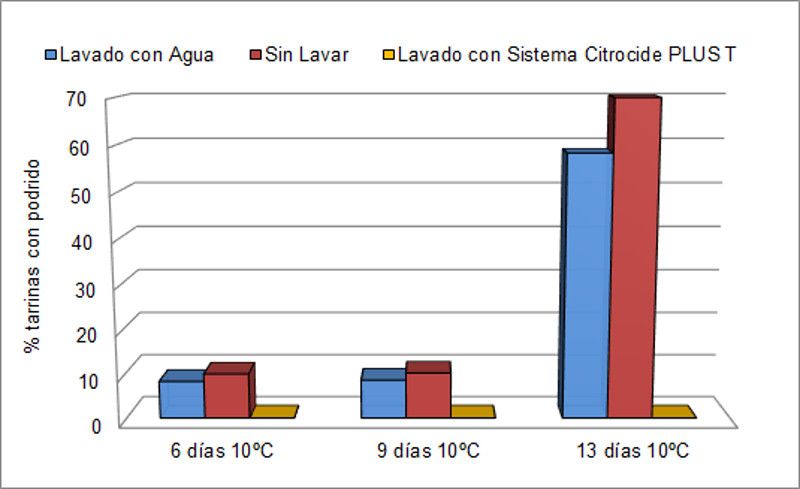 Citrosol, the largest fruit and vegetable producing company in the world has just launched a system that will change the concept of rot control for post-harvest tomatoes.

The Citrocide® PLUS T system obtains control efficiencies of up to 100%. It is a comprehensive system for the hygienic washing of tomatoes that also turns the washing machine into a critical control point that guarantees food safety.

In 2013, Citrosol presented its new pepper washing system, Citrocide® PC P, and now the Valencian company has taken a step forward to remain at the forefront of this sector with the presentation of Citrocide PLUS® T for washing tomatoes. In this way, Citrosol has become a strategic ally for vegetable marketing companies, particularly Spanish exporters which, every day, have to respond to growing demands by their end customers regarding quality and food safety.

“With our comprehensive hygienic washing system for tomatoes we guarantee the food safety of this vegetable, as well as controlling rot in its post-harvest period and decreasing the consumption of water in the washing machines”, underlines the general manager of the company, Benito Orihuel.

100% effectiveness. It is essential for the tomatoes to be washed and this cannot be done with water alone. The results may be observed from tests performed on 250 gram containers of cherry tomatoes (with 20-21 tomatoes in each container) on the attached graph. At a temperature of 10º, with a relative humidity of 85%, after 6 days of storage, 8.3% of the cherry tomatoes that had been washed with water had one or more rotten fruits; at this same temperature, over the same period of time, 10% of the containers that had not been washed had rotten fruit; whilst at 10º, after 6 days, the containers washed using the Citrocide Plus® T system contained no rotten fruit at all.

This efficiency of the Citrosol system was repeated over periods of 9 and 13 days. 100% efficiencies when compared with the control processes.

The most hygienic washing. The Citrocide® PLUS T system acts by effectively inactivating any type of microorganisms, including those that cause rotting in tomatoes and the pathogens that are potentially hazardous for human health, reducing and even eliminating the microbiological contamination on the surface of the tomato, in the washing water and in the washing machine.

Savings in water and traceability. The Citrocide® PLUS T system also allows important amounts of water to be saved in the tomato washing process. At all times the water is kept free from any microorganisms, allowing it to be safely recycled.

Likewise, the system is equipped with a computer programme that allows it to record and transfer the relevant information about the dosing process and control, guaranteeing a detailed traceability.