Citrosol is fighting against Cold Damage 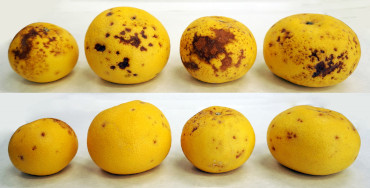 The CI-CONTROL coatings control spotting in shipments and cold storage

In recent years Citrosol have developed and brought to market various products that substantially extend the shelf life of citrus fruit. Solutions that fully control or substantially mitigate a range of physiological disorders that become manifest in the form of stains or marks that appear during their postharvest logistics chain. Among those developed are PLANTSEAL®, plant-based coatings with both ecological and vegan certification and CITROPROTECT®, that can be applied at the time of the, so-called, 1st treatment.

With CI-CONTROL, Citrosol have created a new strategy to minimize peel damage caused by CI, offering results similar to those obtained with the active ingredient, Tiabendazole (TBZ).

These waxes already substantially reduce peel damage even in their original formulations, but in the new CI-Control formulation they can achieve staining reduction efficacies of 90% or higher as is the case for the plant-based coating, PLANTSEAL® CI-Control. Achieving such high efficacies means the addition of Imazalil or Thiabendazole is now superfluous for this purpose. 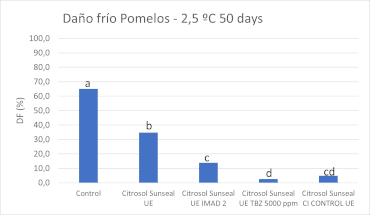 CI-CONTROL coatings have been validated in many long-term refrigerated storage experiments. In Figure 2 it can be seen how Citrosol Sunseal® UE CI-Control protects against peel damage as much as the addition of 5000 ppm TBZ to the original formulation of Citrosol Sunseal® UE. or 2000 ppm of Imazalil.

CI-CONTROL coatings are a huge step forward in the fight to protect and prolong the commercial life of citrus fruit exported between hemispheres and that in cold storage. They mitigate, even eliminate, those tainted by Chilling Injury.