David Bodas, a passion for heights

Born in Madrid 47 years ago, he is good-natured, talkative and he admits to having few prejudices, showing his common sense in an undisputable way. 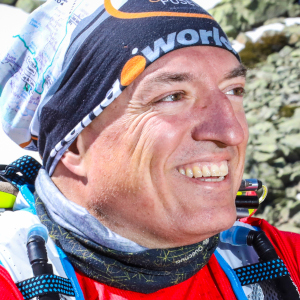 I walked for almost two hours to reach Peñalara’s Laguna Grande. This glacial cirque is crowned at its highest point by a triangulation station, at 2,428 metres, the Peñalara peak, the highest in the Guadarrama mountain range. Panting from the effort, sitting on a granite rock, I interviewed David Bodas at an altitude of 2,050 metres. The spectacular vista was worth the effort.

Before meeting up with me, David had been training for hours amongst the crags. He had casually spent four hours running along dizzying ridges, still covered by the last touches of the Philomena storm.

Born in Madrid 47 years ago, he is good-natured, talkative and he admits to having few prejudices, showing his common sense in an undisputable way. At times, his comments are very ‘free’, but they denote considerable knowledge. He studied biology and he is passionate about processes such as fermentation, which have led him to produce his own beer. He has just moved to Moralzarzal, a small town in the mountains, north of Madrid.

The first thing that I realised while climbing up is that, regrettably, I am a city girl. I am not fit and that not enough oxygen is reaching my brain to carry out the interview. Having said that, once at the top, I would like to thank you for showing me this incredible view of Nature.

Do you understand now why I used to get up at six am when I lived in Madrid to come here to run?

Of course. Tell me about your emotional attachment to the mountains.

My mother and father instilled a love of nature in me. When I was just four years old, I travelled the ‘Senda del Rio Cares’, in Asturias, and the ‘Cola de Caballo’ routes, in the Pyrenees. Later on, for many years I was a Boy Scout and I made great friends who also love the mountains in this group, friends that I still have. I feel close to the mountains because I grew up with them. I go hiking, mountaineering, climbing, skiing; I have spent nights in mountain refuges…

Yes, but running along these ridges is not comparable to hiking…

It was my brother’s fault; he got me hooked about ten years ago. Now it is a passion.

How has your training session been today?

It was good; I ran around 14 kilometres, with gusts of wind of 25 km/h at some points and some uncertainty – due to the unevenness and the snowy ground, as to whether to use crampons or not to go up the snowy paths. In the end, I didn’t use them; I trod in other people’s footprints.

Could you tell me what you carry in your rucksack and what is your personal equipment?

I carry a thermal blanket, crampons, walking poles, a cagoule with a 10,000 water column and windcheater. Regarding food, I carry cereal bars, fruit, water with a gel and salts for dehydration, in case I get cramp.

My equipment is what you see, with a thermal tee-shirt underneath, some sleeves and glasses.

You don’t want to convince me that with those shorts on you are ready for anything? Or are you wearing them to show me your tattoo and at the same time let me see your very fruity socks?

I don’t like wearing long trousers unless the weather is below five degrees, although this means cold, and some bumps or scratches. I am more comfortable like this. And, obviously, I am not wearing them to show off the Iberian bear I have on my thigh, because I also have a panther tattooed on my shoulder. Both drawings were done by an Australian tattooist specialising in micro-realism, who works very well on the details.

I suppose that to do what you do, training is essential. How do you manage when you are travelling?

I train every day. It is very easy to slip some trainers in your suitcase and I don’t have to train in the mountains. There are many types of training sessions: increased resistance, strength, speed or change of intensity. Mind you, I go to the mountains twice at the weekend.

Which race has the best memories for you and what are your next ones?

Things have changed with the pandemic, and the last time I ran was in December with a face mask and running four at a time.

Next June my team will run the Gran Trail Picos de Europa, but I cannot go because I am committed to running a 100 km race for Intermon Oxfam, of which finally they have just left the 50 km version in Gerona and we cannot participate in it due to the current situation.

What other memories do you have of your childhood, in addition to the mountains?

I was taken for walks in the country from a very early age, in Asturias by my mother and Toledo by my father. I remember how we played with the farm animals or collected cow pats, which we put on a grating to make traps to catch dung beetles, which we then put in jars and took home.

Your biology streak had already appeared

I always say that I have been a biologist since I was 6 years old. Some friends of my parents babysat for us. Fermín Martín Piera, a worldwide renowned entomologist from the CSIC was one of them. He loved the mountains and we caught all the little animals I have mentioned with him.

I am a biologist due to his influence, although I didn’t choose zoology or botany because I preferred microbiology, fermentations, alimentation etc. For this reason I dedicated my graduate thesis to him. He was an extraordinary man who died of a tropical disease that he caught while researching in Colombia.

When we met many years ago, I remember you with a different complexion.

Yes, I was ‘larger’ to say it nicely. In six months, with the help of a dietician, I lost 28 kilos. Now I am still in the hands of a health professional, who is also a triathlete and who maintains my diet with the energy requirements that I need to be able to do high intensity sport.

You can’t deny that you like eating because you know the names of all the restaurants in the area.

Why do you think I was fat? I love enjoying good food, making it and sharing time with friends. Now, in my new house we have a wood-fired oven, so we are about to start out on a new adventure. I make my own cereal bars with oats, dried fruits, bilberries…

I have been told that as well as liking beer, you also make it.

Yes, I started two years ago. At the moment, I make around 5 litres, but next time I will make a 30 litre batch, along with a little experimentation with flavours.

I see that you are someone who is up for anything.

In general, I think that we ourselves put up too many barriers, putting value on what others might be thinking and prejudging ourselves. I have always liked to be very free, and breaking down the established preconceptions.

Are you mentioning this for the time you gave a crowded conference wearing a shirt with coloured whales on it?

Ha, ha, ha. Where is it written that you have to dress in one way or another? Others can all be the same, not me.

PrevFaster, faster – pass the law
Sebastià Escarp, the soul of a farmerNext
YOU COULD ALSO BE INTERESTED IN