Sebastià Escarp, the soul of a farmer

Sebastià Escarp (Alcarràs, 1965) is a simple man, who talks passionately about his profession, who lives it and whose eyes shine when he tells me he has purchased a new property. 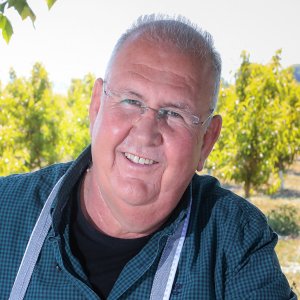 I always try to not interview anyone in their workplace. There are times, however, when the devotion to the land runs through the person’s veins.

We had talked about the possibility of this interview on several occasions and Sebastiá asked for us to meet up at his farmhouse. But this couldn’t take place at any point during the year, because he wanted me to walk the land and to see the green lines that fill the landscape with trees in their orderly lines.

Sebastià Escarp (Alcarràs, 1965) is a simple man, who talks passionately about his profession, who lives it and whose eyes shine when he tells me he has purchased a new property. He is a cooperativism activist and he says that he wouldn’t understand anything without ‘his cooperative’. His business brings together the entire family, or the entire family comes together through the business. I find it difficult to define properly.

He promised to prepare braised snails for me because although he is not a good cook, he makes them so well that it is the first thing his friends and relatives ask him for whenever they meet. Therefore, he has become a specialist.

After doing the shopping in the cooperative’s supermarket, we go to the farmhouse and, on the way, he explains some stories about the properties of the land in this region of Catalonia, a moveable border with Aragon, which is known as ‘La Franja’ (The Strip).

We have come up against the Church. I was left speechless when I heard about the tithe to the ecclesiastic Chapter. I thought that this practice had come to an end centuries ago.

No, it carried on in this region of Catalonia until well into the 1970s. I vaguely remember seeing the collectors on my father’s lands, but my brother, who is slightly older than me, experienced it first-hand.

Do you mark an X for the Church on your Income Tax Return?

Well, the truth is no, they have taken enough from the poor for centuries. I prefer to donate to social purposes.

I have the feeling that you live here more than in your own house.

You could say that, because I spend more time here. I even have my first cup of coffee in the morning here, looking out at the trees.

I hope you don’t disappoint me with the snails. I haven’t eaten them in the way they are traditionally cooked here for over ten years. I should give you advance warning that for ‘fuet’ sausage and braised meat, I have a good appetite.

I realise that it is a dish that causes some controversy: either you love them or you hate them, but I won’t disappoint you because I have my own personal way of cooking them, with specific times for seasoning them using different ingredients. Also, these are very tasty garden snails.

Where did you find this method?

I learnt it from my father-in-law, who was a real perfectionist when preparing them. Previously, it was what the poor peasants ate while they were in the fields. They made a fire with what they could find and they cooked them on stones. Then they carried on working. Today, it has become a delicatessen dish in Michelin-Starred restaurants. In Lerida, they are more than just a meal. We have a popular festival (L’Aplec del Caragol) in May, a culinary display when tonnes of snails are eaten that has processions, ‘castellers’ and live music. And in my own village, Alcarràs, they are also extremely popular during the Local Festivities, known as ‘Les Cassoles’.

How many times do you think you have braised snails?

Possibly hundreds. I think I could even cook them with my eyes closed.

Did you always know that you wanted to be a farmer?

Not really. When I finished my military service, I started working in a cartridge factory, but one day my brother and I decided that our father needed help and that is how it all began. And we have never stopped since then, the two of us together.

It could be said that you are a ‘powerful’ farmer.

I am the son of a farmer and what we have is the result of great effort and many other determining factors, such as the role played by the IRIDA, the concentration of plots of land, the actual existence of the cooperative without which I cannot imagine anything, etc., and of course, good management.

At least, after so much effort, you can see it passing onto the next generation.

Yes, this is true. I only have one son, but he loves the land just as I do; if he is not riding a motorbike, he is on a tractor. I know he really feels it in his blood. My brother’s son is the same. We don’t know what will happen, but at least we will leave a road map marked out for them both.

How do you spend your weekends?

As my son is an avid motorcycling fan, in the morning we go to the Alcarrás Motorcycle Circuit. I enjoy the brunch more than watching the races, with the relaxed atmosphere that you can breathe in. We then usually come to the farmhouse for lunch.

Do you have eight Catalan surnames?

I think that the eight are Catalan because both my father and my mother come from Alcarràs. Let me think: Escarp, Serra, Charles, Tomás, Paris, Canadell, San Joan and Estela. That is all of them.

It has become very fashionable to ‘live Madrid-style’. Do you live ‘Catalan-style’?

I think that is completely stupid. You can live Catalan-style or Madrid-style in many different ways. My way is this: my village, my land and my language, the language of my mother and my ancestors.

With this job, do you ever take a summer holiday?

I have everything under control and before the peak starts here, I go to one of the nearby beaches with my wife. This year we are going to Comarruga.

I know that you are a great fan of the radio and you also move around channels. Ha Ha. And on the TV, ‘Pasapalabra’ has caught you in its net.

I spend so many hours on a tractor that the radio has always kept me company. Many years ago, I used to listen to La Ser, then I changed to ‘El matí de Catalunya Radio’ with Manel Fuentes y I now listen to RAC1, with Basté. I like to change. And when I’m tired of listening to the news or about politics, I like to switch around to Flaixback or Spotify to listen to music from when I was young. At home, it is true that all the family is glued to ‘Pasapalabra’ until dinner time. At least it is not junk TV.

PrevDavid Bodas, a passion for heights
Zespri™ SunGold™, deliciously sweetNext
YOU COULD ALSO BE INTERESTED IN