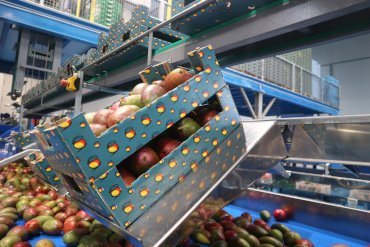 Its Andean subsidiary adds 1,000 t of mangoes and 3,000 t of avocados to its Spanish production

Just over two years ago, Alcoaxarquía extended its activity with the start up of a subsidiary in Peru, where 8 professionals work. This carefully considered selection responded to the idea that it is “the only country with quality that is really similar to Spain’s”. In this way, Alcoaxarquía guarantees high quality with a single third source for counterseason produce. During this campaign, the Andean country will supply 1,000 t of mangos and 3,000 t of avocados, while the Spanish harvest will reach figures of 1,000 in mangos and 6,000 t in avocados.

The manager, José Antonio Alconchel, met up with Fruit Today to show the 2019/2020 harvest forecast, “with the highest quality of the last 5 years.” This point has been confirmed from the start of the harvest of the first variety, Tommy Atkins, “with an extra 2 brix on average compared to other years, great homogeneity and colour.” Osteen joined the harvest process next (70% of its mango volumes), followed by Keitt (20%) and the new variety, Palmer, with which the sales window will be lengthened until the 15th of November.

Conversely to what is happening this year due to alternate bearing, the company from Malaga is expecting to maintain its mango volumes thanks to its youngest farms coming into production, which will compensate the smaller harvest from the older plantations. The avocado production will increase, with 10% more between Hass, Bacon and Fuerte, according to the first estimates. Currently they have ecological farms and some that are in the middle of a conversion process, and “in a maximum of 3 years, we expect to have 100% bio production.”

Alcoaxarquía’s business evolution is visible at all levels. Not only in the most obvious parts – last year’s opening of its new installations and the modernisation of its processes, in which it has invested 4 million Euros, but also in other aspects such as CSR, in this case through sustainability. The company will present its new developments on this point at Fruit Attraction (Hall 9, 9F03B): new mesh packaging with bio-compostable strips of non-GMO corn and potato starch, as well as its commitment to laser labelling, with an investment of € 400,000 in packaging machinery.

Along with avocados and mangos, Alcoaxarquía offers 100% eco oranges, sweet potatoes and ginger, as all its farms hold the appropriate certificates.