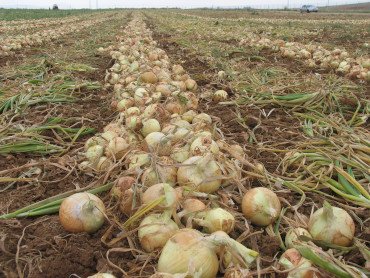 Spain exported 404,587 tonnes of onions in 2019 and this figure turns the Spanish producing-marketing sector into one of the most important agents in international trade.

The main bastion of the Spanish onion sector lies in the intra-community market and, traditionally, the United Kingdom has been the largest importer of this vegetable. Spanish production, however, was always put to one side when their own production reached the supermarket shelves, marked with the British flag to show it as national produce.

This British loyalty to their own product remains true and is added to an important economic crisis caused by Brexit and, more recently, by the Covid-19 pandemic, an aspect that could also have had an impact on this drop in sales.

However, Germany, which historically has held second place, has become the top buyer for Spanish produce. In 2019, exports to Germany exceeded British ones by 2,556 tonnes, with a total of 107,645 tonnes compared to the 105,089 going to the United Kingdom. Everything is pointing towards the fact that Germany will once again be the leading buyer of Spanish onions in 2020. With sales figures that are already above the British ones in the first quarter, reaching 23.565 tonnes in the first months of the year when the variances due to the Covid-19 pandemic were already wreaking havoc on world trade.

France is the third European buyer of Spanish onions, making purchases of 40,169 tonnes in 2019, just ahead of Portugal, which acquired 32,824 tonnes, an important volume, if it is divided up per capita.

The largest Spanish production is concentrated in the Castilla-La Mancha region. However, the marketing and operational activities are carried out from the Comunidad Valenciana, a region which, although it does not have the same production importance as it used to, continues to have important import-export ties and many of its operators have installations in Castilla-La Mancha.

Regarding Spanish imports, it must be said that Peru is the main supplier with its sweet or mild onions, which continue to gain market share, as the attached Foreign Trade statistics indicate.

The start of the Spanish campaign has been marked by a general oversupply, a delay in the harvest and health problems due to the rain, as well as the closure of the Horeca channel. All of this, within a panorama of European lockdown, where only the Spanish home market kept up the demand. A difficult situation on the markets that is tending to take its time to correct itself, according to different operators. Without forgetting that onions from New Zealand, Tasmania or South Africa will continue to be on the European markets until mid-August, when the European harvest starts to come into its own and the others are removed from the market.

Eladio Barrachina, manager of the Valencian consortium VECA, (formed by Cebollas Ilustra, Rovira Agrícola, Bonafont and Juan Antonio Mora), an expert in long distance exports, explains that Spanish exports have always been very concentrated in exporting very large calibres and “possibly, the time has come to think about another trend with specific calibres for every market.”