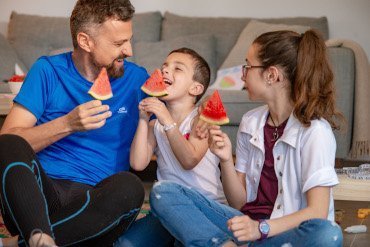 ‘Let nothing stop you’ is this year’s advertising claim

In 2018, the AGF Group started its transition from being a watermelon brand to a health brand, and this year this project is being consolidated and new steps are being taken with actions such as the collaboration in the charity fun run ‘1st runner Fashion, blue race for autism’ on the 31st of March. This coincided with ALTEA’s plan of activities scheduled within the framework of the World Autism Awareness Day and the sponsorship of the Master in Food, Exercise and Sport for Health ‘Food&Fit’ from the Universidad de Granada. Likewise, after carrying out a study on the benefits of citrulline with the Polytechnic University of Cartagena, they are working on a new study proposal related to this subject.

‘Que nada te pare/Let nothing stop you’ is the new advertising claim for the Fashion watermelon campaign. It is a positive message that they are implementing and using to reflect the company’s commitment to dynamism, physical activity, social responsibility and, in short, an active and healthy life.

The campaign started on the 4th of March with fruit from Senegal and, in the second fortnight of April, the national campaign will begin with the harvests in Western Almeria, always with the philosophy of avoiding overlapping productions and giving priority to national produce. In total, they expect to reach between 80-85 million kilos on 1,800 hectares of cropland, that is to say, 1.2% more compared to the previous year.

Coinciding with the start of the campaign in Spain, Fashion will launch its new television commercial. For the advertisement they have signed a soundbranding agreement with the Maico group that is in charge of adding the music, and the same tune will be used as a header at all the different events that the company organises this year. On the other hand, the online channel will take on more significance in the brand’s communication strategy, using platforms such as MiTele (Tele5), Atresplayer (Atresmedia), Yomvi (Movistar Plus) and other social media networks. “We are going to work alongside influencers such as Carlos Ríos to reach a young, involved audience that is committed to healthy eating,” adds Víctor González, head of Marketing.